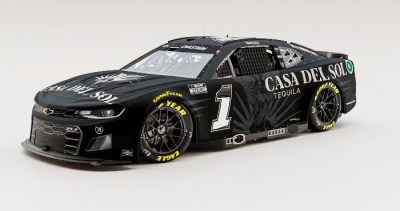 Trackhouse Racing might have one of the most popular corporate partners in the garage Sunday when the NASCAR Cup Series visits Auto Club Speedway in Fontana, Calif.

The team announced today that driver Ross Chastain's No. 1 Chevrolet will carry the livery of Casa Del Sol, a luxury sipping tequila this weekend.

Casa Del Sol, launched in September was co-founded by Mexican-American actress, producer, director, and activist Eva Longoria. The ultra-premium spirits brand is inspired by the magic of the golden hour and Mayahuel, the Aztec goddess of agave, and translates to "house of the sun" in Spanish.

"When creating Casa Del Sol, we wanted to deliver a brand that was set apart from the rest. From the liquid to the legacy, we took the time to develop an ultra-premium tequila focusing on authenticity and a distinct flavor profile. With Casa Del Sol, we are bringing together casual drinkers and tequila enthusiasts alike to enjoy a product with bold taste that everyone will find unforgettable," said Longoria.

Trackhouse Entertainment Group headquartered in Franklin, Tennessee is a burgeoning sports and entertainment enterprise with plans to marry the cultures of music and motorsports. It owns Trackhouse Racing and is headquartered in Concord, North Carolina, which fields Chevrolet Camaros for Daniel Suárez, the only Mexican driver in the NASCAR Cup Series, and Chastain.

“Like we do with all of our corporate partners, we plan to create great memories with great people this weekend and spread the word about Casa Del Sol to tequila aficionados across the country.”

The NASCAR Cup Series will practice and qualify on Saturday then hold its second points race of the season Sunday in Fontana.