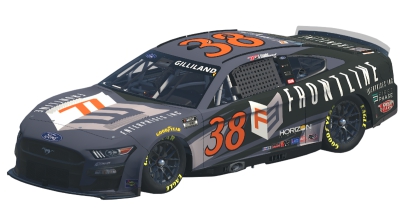 The familiar Frontline Enterprises scheme will adorn the No. 38 Ford Mustang this weekend at the Auto Club Speedway and again at the Las Vegas Motor Speedway and the Phoenix Raceway. The company has been a supporter of FRM and Gilliland for the last two seasons in the NASCAR Camping World Truck Series.

“We are really excited to move up to the NASCAR Cup Series with Todd and Front Row Motorsports,” said Brett Stevens, Owner, Frontline Enterprises. “We’ve watched Todd grow as a competitor and climb through the NASCAR ranks and cannot wait to see him tackle his rookie season.”

Gilliland is thrilled to carry the Frontline Enterprises brand again this season.

“Having Frontline Enterprises come on board in my first Cup Series season means so much to me,” said Gilliland. “They have been with me for the past few seasons in the NASCAR Camping World Truck Series, and even before that. It’s really special to have them make the move with me into the NASCAR Cup Series. They are great friends and we want to have a great next three races for them.”

Frontline Enterprises will also be an associate partner of Gilliland and the No. 38 Ford Mustang team all season.