Ford Performance NASCAR: Ford Off to Perfect Start in Next Gen Era as Cindric Wins Daytona 500 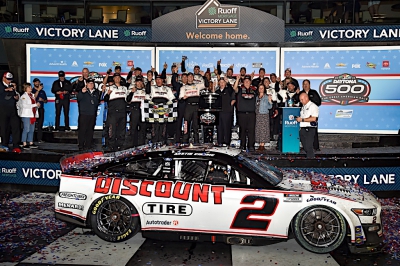 The NASCAR Next Gen era has gotten off to a perfect start for Ford Performance as rookie Austin Cindric gave Mustang its second win in as many starts by capturing the 64th Annual Daytona 500 Sunday afternoon at Daytona International Speedway.

After Joey Logano drove his Team Penske Mustang to a win in the car’s debut event two weeks ago in the Clash at the Coliseum, Cindric did the same in the 500 as he won in his first start as driver of the No. 2 Ford.

“I knew I had the car to do it, but there’s so many things that have to play out correctly and putting yourself in position,” said Cindric.  “Sometimes you have to force people to help you and I definitely didn’t expect any help throughout the day.  I did get some from the Fords, and I think Ford has done an incredible job with this new car and it’s obviously shown the first couple races.  I’m just proud to be able to hold off those runs at the end of the race and it means the world to me to be able to sit here and say I’m a Daytona 500 winner.”

Cindric found himself as the leader when caution came out on lap 196 of the scheduled 200-lap event, resulting in a two-lap overtime finish.  He got some help on the restart from teammate Ryan Blaney and maintained the lead as the field took the white flag, signifying the final lap.  It stayed that way until they came off turn four, but Cindric was able to take the checkered flag first as cars bounced off the wall and each other across the finish line.

“It is a dream,” said Mark Rushbrook, global director, Ford Performance Motorsports.  “To see how well this Next Gen car raced today after more than two years of development is great for the sport.  But then to have that Ford teamwork and see everyone working together was really special.  It’s a long season, but to win the Clash at the Coliseum and now the Daytona 500 for a second year in a row is a great way to start.”

Mustang, which has been recognized as the world’s best-selling sports car each of the last two years, is in its fourth season competing in the NASCAR Cup Series.  It has now won 36 races in 109 career starts.

Cindric is the 14th different driver to win the Daytona 500 with Ford, which has now won “The Great American Race” four times in the last eight years.