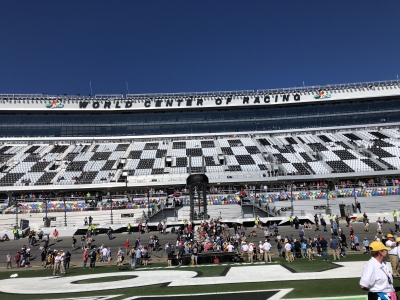 DAYTONA BEACH, FLORIDA - FEBRUARY 20: The frontstretch at Daytona International Speedway before the 64th running of the Daytona 500 on February 20, 2022 in Daytona Beach, Florida. (Photo by Jason Guth/Speedway Digest)

DAYTONA BEACH, Fla. -- It’s that time again. The roar of the engines returns to the high banks of Daytona International Speedway today for the 64th running of "The Great American Race." With anticipation running high with the debut of NASCAR’s Next Gen car – a sellout crowd has been announced for the festivities – this race promises to be worthy of its nickname.

Defending champion Kyle Larson picked up right where he left off in Phoenix, securing his first career Daytona 500 pole. Hendrick teammate Alex Bowman joins him on the front row, the fifth straight year Bowman will help lead the field to green.

Formula 1 veteran Jacques Villeneuve (Team Hezeberg) and Xfinity series regular Noah Gragson (Beard Motorsports) were the top open cars in qualifying Wednesday night, locking them into the 40-car field. Both drivers will be competing in their first Daytona 500 after failing once previously to make the show – Villeneuve missed the mark in 2008 while Gragson was unsuccessful a season ago.

Kaz Grala and JJ Yeley were left to battle it out in Duel 1, while Greg Biffle and Timmy Hill were set to – pardon the pun – duel in Duel 2.

Driving for boxing legend Floyd Mayweather’s brand new The Money Team Racing, Grala was able to execute a last-lap pass of Yeley in turn two, earning him his second consecutive start in the 500 and a 35th-place starting spot.

Because Hill went down a lap relatively early in the going in Duel 2, Biffle – returning to the Cup series for the first time since 2016 with NY Racing Team – knew what he had to do: Not lose the draft, and bring it home in one piece. Indeed, he was able to accomplish both tasks, finishing 13th in his duel; he starts 28th today.

With any new season comes a great deal of change in the sport – and this year is no exception.

Upstart Team Trackhouse – led by former driver Justin Marks and music star Pitbull – are in their second campaign after a modestly successful first year with Daniel Suarez. Expanding rapidly, the team purchased the assets of Chip Ganassi Racing late last season and moved into Ganassi’s shop for 2022, adding Ross Chastain to pilot the No. 1 car.

His predecessor, Kurt Busch, moves over to Michael Jordan and Denny Hamlin’s 23XI Racing to drive the No. 45 Toyota Camry TRD. He joins Bubba Wallace who captured his first career Cup victory last fall at Talladega.

2020 Xfinity series champion Austin Cindric moves up to Cup to drive the No. 2 Team Penske Ford, formerly driven by 2012 Cup champion Brad Keselowski. Keselowski moves over to the renamed Roush Fenway Keselowski Racing (RFK), gaining part-ownership in the team and joining new teammate Chris Buescher. Each driver won their respective Duel on Thursday night, giving RFK ownership of the second row. Ryan Blaney and Joey Logano once again round out the Penske trio.

Xfinity standouts Kaulig Racing will make their first foray into full-time Cup racing this season as Justin Haley takes the reigns of the No. 31 LeafFilter Chevrolet. They will also field a second full-time car – the No. 16 – which will be piloted by A.J. Allmendinger (14 races); Gragson (14); and 2021 Xfinity champion Daniel Hemric (8, including the Daytona 500). Allmendinger and Hemric – who moves over from Joe Gibbs Racing – will also compete full-time for Kaulig in the Xfinity series, where they will battle Gragson and JR Motorsports for the title.

Ty Dillon makes his return to the Cup series full-time after running only four Cup events in 2021 for Gaunt Brothers Racing. He joins Erik Jones at the newly-merged Petty GMS Racing, with Jones in the No. 43 and Dillon in the No. 42.

Todd Gilliland takes over driving duties of the No. 38 Ford for Front Row Motorsports as Anthony Alfredo returns to the Xfinity series full-time with Our Motorsports. 2022 marks Gilliland’s first season in Cup, following nearly 100 truck races that netted him two victories since 2017. Gilliland joins 2021 Daytona 500 champion Michael McDowell in the Front Row stable, as McDowell – starting sixth – looks to follow Hamlin’s lead from 2019 and 2020 and repeat in NASCAR’s biggest race.