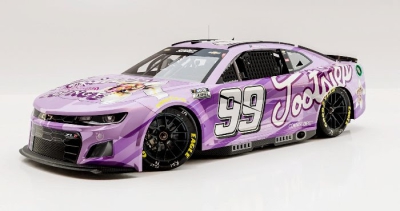 A Mexican driver would love nothing more than to win The Great American Race.

That's Daniel Suárez's quest this week as he embarks on DAYTONA Speedweeks Presented by AdventHealth in preparation for the 64th annual Daytona 500 - NASCAR's most prestigous race.

The Monterrey, Mexico native won't have trouble knowing where to celebrate if he scores his first NASCAR Cup Series victory.

Tootsie's World-Famous Orchid Lounge, the legendary and historic honky-tonk in the heart of Nashville's Lower Broadway entertainment district, will serve as primary sponsor on Trackhouse Racing’s No. 99 Chevrolet Camaro for Sunday's race as well as multiple races in the 2022 NASCAR Cup Series season.

Suárez arrives in Florida after finishing 14th at the season-opening Clash exhibition race at the Los Angeles Memorial Coliseum. The No. 99 showed speed throughout the exhbition race that it hopes to continue on the highbanks of Daytona.

It is a race of firsts for NASCAR as well as Suárez who will drive Trackhouse Racing's Next Gen Chevrolet for the first time in a points race. Trackhouse owner Justin Marks' acquisition of Chip Ganassi Racing's NASCAR assets in the off-season added Ross Chastain to the driver lineup giving Suárez his first teammate since 2019.

Suárez will join single car qualifying Wednesday night, race in one of the Daytona Duels on Thursday night and in the Daytona 500 on Sunday.

Fox and FS1 will broadcast all of the action.

Daniel Suárez, Driver of the No. 99 Tootsie's Chevrolet Camaro

Where is Trackhouse Racing in its growth?

“It is a process. I think today, thanks to a lot of people, we are in a pretty good spot. Last year, we started the season with a close partnership with RCR and without them we wouldn’t be here. It was a huge help to be able to start strong. Without that support, it is almost impossible to be competitive. There is so much information, so much data out there that require years and people and manufacturers to be able get. It’s a process. Trackhouse Racing, Justin Marks, Ty Norris, this great group of people, Pitbull they have done a great

job you know. "We had to start the right way, like I said with help from Chevrolet and RCR. Now we are kind of like doing our own thing, but we are still under the umbrella of Chevrolet. It’s been great and I feel like when it comes to sponsors we have to do a good job, not just in the racetrack but also outside the racetrack. I feel like so far we have done a pretty decent job, but really we could push it and there is always room for improvement."

What would it mean to you to win the Daytona 500?

"That's why I race. Every driver in this sport wants to win a Daytona 500 and a championship. I have won the Xfinity title, and now is a good time to add more trophies to the trophy case."

What will you do if you win the Daytona 500?

"We will spend the week at Tootsie's in Nashville and hope we make it to Fontana for the next race!"