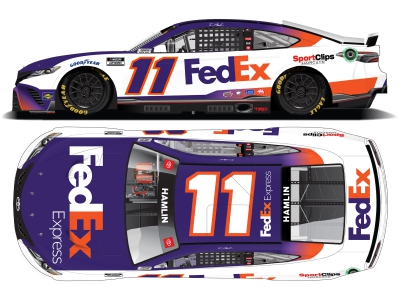 2021 Season Review: Last season was another brilliant campaign for Denny Hamlin and the FedEx Racing team. The Chesterfield, Virginia native claimed two victories – both during the playoffs – and matched his career high for top-five finishes (19) while posting personal bests in top-10s (25), laps led (1,502) and average finish (8.4). He reached the Championship 4 for the third consecutive year and the fourth time since the winner-take-all finale’s inception in 2014.

Clash Recap: The FedEx Racing team finished 23rd in The Clash at Los Angeles Memorial Coliseum on February 6. After earning his way into the main event by winning a last-chance-qualifier race, Hamlin started 17th and spent the opening 50 laps trying to fight his way forward. Unfortunately, a broken power steering belt ended the team’s day after only 52 laps.

Elite Company: Hamlin is tied with NASCAR Hall of Famers Bobby Allison, Jeff Gordon, and Dale Jarrett on the short list of drivers who have three Daytona 500 victories. If Hamlin can capture his fourth Harley J. Earl trophy, he would tie Cale Yarborough for second all-time behind only seven-time winner Richard Petty.

Leading the Way: When it comes to the Daytona 500, Hamlin leads all active drivers in wins (three) and laps led (474). He is also tied for the most top-five finishes (eight). The FedEx Racing driver has earned four consecutive top-five finishes in The Great American Race dating back to 2018.

What makes the Daytona 500 so special?

“It has always been our biggest race even though it’s the very first one of the season. It’s at the place where speed was born, it’s at the place where NASCAR was born. It just has a prestige to it that no other track and no other event has ever had or will ever come close to. It’s a spectacle watching all the cars within a couple seconds of each other not knowing when a wreck is going to break out. That’s always exciting. For a race car driver, as much anxiety as we may have, we know that the race fan in us says ‘This is a great show’ and the Daytona 500 has always been a great show.”

How much different will the racing be now with the Next Gen car for the first time?

“It really is different because when we switched from the Generation-5 car to the Generation-6, the change wasn’t all that much, but these cars certainly draft quite a bit different. With that being said, you’re still manipulating the air. So, in the grand scheme of things, everybody is going to run wide open and the person in front is the one who manipulates the air the best. Behind that, you’re fighting for pockets of air to find runs to do what you have to do to get up front. That aspect will continue to be the same no matter what.”

FedEx Express Along for the Ride at Daytona: For the Daytona 500, the iconic 500-mile NASCAR Cup Series season opener, FedEx Express is recognizing the hard work and dedication of our AGFS and U.S. Operations team members in the EWR Market by featuring the letters EWR on the B-post of the No. 11 FedEx Camry.  Communication and collaboration between the local market stations, the ramp, and the hub and a strong adherence to Quality Driven Management (QDM) allows for sound and sustainable processes in support of safety and operational excellence.  FedEx Express is honored to recognize our teams in the EWR Market for always working to make our customers’ experiences outstanding.