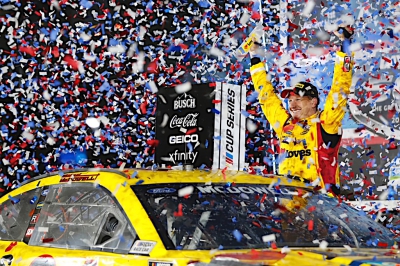 Ahead of this year’s Daytona 500, Michael McDowell, professional NASCAR driver racing the No. 34 Ford Mustang for Front Row Motorsports and 2021 underdog and unlikely champion of the Daytona 500, is partnering with global storytelling organization, I Am Second, to release a new short film on Feb. 15.Screen Shot 2022-02-07 at 9.06.48 PM.png

In the first and biggest race of 2021, the Daytona 500, he encountered the most pivotal moment in his career – coming in first place for the first time; McDowell experienced an exuberance he couldn’t explain. The new film shares McDowell’s realization in the moments after his win that helped him better understand his journey and change his life forever.

“I remember being overwhelmed with emotion – to finally win a race and to do it at the Daytona 500,” said McDowell. “I remember about 30 minutes after the win just this overwhelming gratefulness, and a very sobering realization that I didn’t do anything – God literally provided this opportunity and it started 14 years ago. God was walking with me through the valleys before we got to the mountaintop, molding and shaping me.”

Launching into the NASCAR scene as a rookie in 2008, McDowell came into the sport with a large, multi-year contract, a determination to make it big, and a cockiness that consumed him, but within a short period of nine months and after the crash, he found himself without a job, soon expecting his first child and struggling to make ends meet. What followed was 10 years of perseverance and leaning on God’s faithfulness despite trials and set-backs.

“God spoke to me that these hard times I was facing were for a reason … God always has a plan and it doesn’t always look how I want it to or how I expected it to, but God is faithful,” said McDowell. “I came to the racetrack week after week hopeful that I’d finally get the opportunity to win a race. It took a long long time and a lot of trials to get there but my opportunity finally came.”

To sign up to receive notification for the short film launch on Feb. 15, visit iamsecond.com/mcdowell.

I Am Second PR