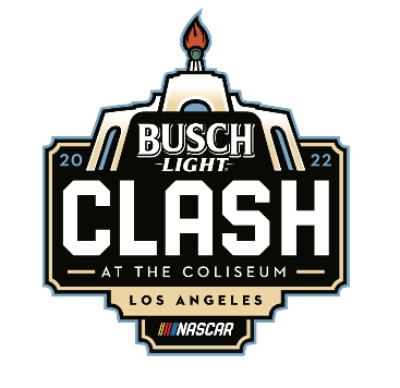 Next Race: Busch Light Clash at the Coliseum

To jump start the 74th year of the NASCAR Cup Series, the premier division is ushering in a new era for the sport that is shaking up the status quo. A new car debuts on a new track, with the much anticipated Next Gen car seeing its first on-track competition at the purpose-built, quarter-mile, asphalt oval inside the historic Los Angeles Memorial Coliseum.

On February 6, at 6 p.m. ET (3 p.m. PT on FOX, MRN and SiriusXM NASCAR Radio), the Busch Light Clash at the Coliseum fires the engines on the 2022 season at a track other than Daytona (Fla.) International Speedway for the first time since 1981 when the series opened its schedule at Riverside (Calif.) International Raceway.

This weekend’s event will be the 44th annual non-points exhibition race that has been hosted by the NASCAR Cup Series since 1979. The L.A. Memorial Coliseum is the third different venue to hold the Busch Light Clash – Daytona International Speedway hosted the event from 1979 to 2020 and then the Daytona Road Course put on the race in 2021.

The Next Gen car, and the Busch Light Clash at the Coliseum are the just a few examples of all that is making up the new era the series is embarking on this season. Don’t forget, several new changes were made to the schedule in 2022, with the addition of World Wide Technology Raceway and also Homestead-Miami Speedway being moved back to the Playoffs.

“As we demonstrated last year, we are committed to creating the most dynamic schedule for our fans, long term,” said Ben Kennedy, NASCAR senior vice president of strategy and innovation. “With the addition of new and unique venues like the Coliseum and World Wide Technology Raceway, each in markets with passionate NASCAR fans, we’re continuing to build on bold changes to deliver the best racing in the world.”

NASCAR’s Next Gen car has arrived

The wait is over. The NASCAR Next Gen car has arrived and is ready for action.

With more than two years in development, the NASCAR Cup Series Next Gen car, an entirely new racecar, and the seventh version of the stock car NASCAR has introduced since 1949, has arrived and will compete for the first time this weekend at the L.A. Memorial Coliseum in the Busch Light Clash at the Coliseum (Feb. 6 at 6 p.m. ET on FOX, MRN and SiriusXM NASCAR Radio).

NASCAR, drivers, teams and the entire industry have worked countless hours to get to this debut. With each version of the stock car NASCAR has introduced it has been an improvement from its predecessor, but the Next Gen car is a massive leap forward, as never in NASCAR’s 73 prior years has this much time and energy been spent to bring a car from concept to reality.

While the Gen 6 car provided outstanding competition during its time in the series, NASCAR made the decision to overhaul the car with the help from the manufacturers and the teams and as a result things like the H-pattern shifter, five-lug wheels, and even centered door numbers are no more. Instead, Next Gen is equipped with a sequential shifter, a single center-lock wheel nut, 670-horsepower engines, and car numbers just behind the front wheels. But that’s not all, the Next Gen car also boasts rack-and-pinion steering which replaces the recirculating ball, an independent rear suspension upgrade from the full floating axle, carbon fiber-reinforced body panels, and a rear-end diffuser. All of these updates were made in the spirit to increase competition on the track.

The on-track activity begins for the Next Gen car with practice for the Busch Light Clash at the Coliseum this Saturday, Feb. 5 at 12:30 p.m. ET on FS2.

The Los Angeles Memorial Coliseum has been a familiar name in sports for nearly 100 years, having been home to two Olympic Games, two NFL Super Bowls, the 1959 World Series and several collegiate and professional teams such as the USC Trojans, UCLA Bruins, the Los Angeles Rams, the Raiders and the Los Angeles Dodgers.

It has also hosted many memorable and historic events that include the first ever Papal Mass by John Paul II in 1987, Nelson Mandela’s return to the United States and sold-out concerts by big names like the Rolling Stones and Metallica.

Its size and location, combined with its history, has made it iconic, even earning a State and Federal Historic Landmark title in 1984.

Now, NASCAR will be making its first trip to this storied venue to bring the fun and excitement of stock car racing to Angelenos and fans alike. The Coliseum has been transformed from its typically gold and USC cardinal-painted football field to a quarter-mile short track where drivers will debut the new Next Gen cars.

This weekend’s Busch Light Clash at the Coliseum will be on Sunday, Feb. 6 at 6 p.m. ET / 3 p.m. PT on FOX, MRN and SiriusXM NASCAR Radio.

NASCAR fans have a lot to look forward to this weekend - the start of the 2022 season, a first look at the Next Gen cars in on-track competition and performances by some of the music industry’s biggest stars.

Fans will have around-the-clock fun as Grammy award-winning rapper Pitbull will perform a 45-minute concert presented by Coca-Cola prior to the race and Los Angeles icon Ice Cube will perform during the race break. To stay on par with this new and unique season, world-renowned DJ Skee will make NASCAR history by becoming the first live DJ to perform during the caution breaks.

A Los Angeles native and NASCAR fan, Ice Cube is looking forward to performing for fans at the Coliseum and for those watching from home, saying that he’s “excited to be part of an incredible day for NASCAR and LA.”

Similarly, DJ Skee is excited to be a part of this first-of-its-kind event and mesh his unique mix of music with the world of racing, creating an experience for everyone to enjoy.

“I like the fun way that NASCAR is approaching this race, and it’s an honor to be part of the fun.” Skee said. “I know we’re going to have a lot of it together and create lasting memories on this historic day for NASCAR.”

With a new venue like the Los Angeles Memorial Coliseum to host the annual season-opening non-points exhibition race, the Busch Light Clash at the Coliseum (Feb. 6 at 6 p.m. ET / 3 p.m. PT on FOX, MRN and SiriusXM NASCAR Radio) a new format to accompany the 0.25-mile track seemed only fitting.

In 2022, the field was open to 40 entrants to participate in the Busch Light Clash at the Coliseum. Select this link for the latest Preliminary Entry List.

Heading into the weekend, 36 drivers are entered, but first will have to qualify to participate in one of the four Heat races. Of the drivers entered, only 23 will earn a spot in the Main Event and they will have three possible ways to do that.

Select this link for the 2022 Busch Clash at the Coliseum Race Format Graphic.

Busch Light Clash: By The Numbers

Below are key statistical numbers stemming from the Busch Light Clash events from 1979-2022:

0.25 – The length in miles of this weekend’s track, the Los Angeles Memorial Coliseum.

11 – Most number of starts before winning the Busch Light Clash - Rusty Wallace and Mark Martin.

21 – Highest number of wins by a manufacturer in the Busch Light Clash – Chevrolet.

27 – Kevin Harvick’s starting position in 2009, the lowest by a race winner in the event’s history.

51 – Most laps led by a driver that did not win the Busch Light Clash event - Paul Menard in 2019 at Daytona.

150 – The number of laps scheduled for this weekend’s Busch Light Clash at the Coliseum.

197.802 mph – The fastest average speed of the race for the Busch Light Clash - in 1987 at Daytona International Speedway and won by NASCAR Hall of Famer Bill Elliott.

For additional in-depth stats and figures about the upcoming Busch Light Clash at the Coliseum check out NASCARMedia.com’s Statistical Advance Release.

Boxing Legend Floyd ‘Money’ Mayweather forms NASCAR team – Legendary five-division world champion and boxing Hall of Famer Floyd “Money” Mayweather announced this week he will partner with sunglass giant Pit Viper and form the The Money Team Racing (TMTR) which will make its NASCAR Cup Series debut with No. 50 Pit Viper Chevrolet at the Daytona 500 on February 20, 2022. Driver Kaz Grala will pilot the new NASCAR Next Gen Chevrolet with an engine from ECR Engines.

“I love fast cars and I love to compete. I know NASCAR will not be easy, but anything easy isn’t worth doing to me,” Mayweather exclaimed. “With that being said, this move into auto racing seems to be a perfect fit for the Mayweather brand.”

Calling the shots at from the pit box will be NASCAR Cup Series winning crew chief, Tony Eury Jr. The co-owner of TMT Racing, William Auchmoody, an associate of Mayweather’s and a longtime member of the NASCAR community, will serve as the team’s general manager.

“I love the vision that Justin Marks has for Trackhouse,” said UFC President Dana White. “I’m excited to be a part of it and my two favorite things are fast cars and Howler Head. I’m so excited that we’ll be making our first NASCAR appearance this weekend. This is an absolute badass car, and I can’t wait to see it compete on the track at the Coliseum on Sunday.”