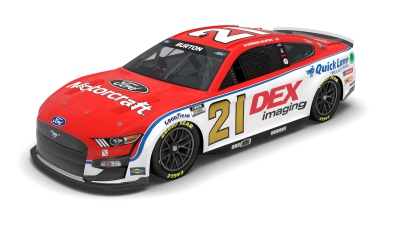 NASCAR’s decision to move the car numbers on the Next Gen car from the traditional center of the door to the front of the car has created an opportunity for co-primary sponsors on the No. 21 Ford Mustang that Harrison Burton will drive in the Daytona 500.

The Wood Brothers’ long-time backer, Motorcraft/Quick Lane, will have its logos on the hood and quarter panels of the No. 21 Mustang. DEX Imaging, the nation’s largest independent office equipment dealer and long-time supporter of Burton throughout his climb up the racing ladder, will be represented on the new door space.

Burton, making his official full-time Cup debut at Daytona, said having those two sponsors sharing top billing on his Mustang is “an unbelievably cool experience.”

“DEX has been with me since I was 13 and has helped me along the way,” Burton said. “And Motorcraft is one of the most historic and storied sponsors ever.”

“I’m excited to represent them both. Motorcraft has a long, successful history at Daytona and has won the 500. And I’m happy to be a part of adding DEX to the fold.”

The two sponsors seem to be as enthusiastic as Burton about their racing programs.

"Everyone at Motorcraft/Quick Lane is thrilled to begin our 22nd season as the primary sponsor of Wood Brothers Racing," said Jon Orth, Marketing Manager for Ford Customer Service Division (FCSD). "We're looking forward to an exciting 2022 campaign with rookie driver Harrison taking the wheel of the new Next Gen Ford Mustang. We're also pleased to welcome DEX Imaging as a co-sponsor of the No. 21 car at the Daytona 500 and throughout this year."
Nancy Lycan, Chief Marketing Officer of DEX Imaging, expressed similar sentiments.

“DEX Imaging is proud and excited to be kicking off the 2022 season at Daytona with Harrison,” Lycan said. “We've come a long way together and anticipate more great performances from Harrison as he debuts in the Cup Series."

Burton said that joining the elite Cup Series is a major challenge for a young driver, but he’s up to the task even though he has just one prior Cup start, last year at Talladega.

This year is different, as the entire Cup field will be adjusting to an all-new Next Gen race car. Burton said that offers some advantage for him, but not as much as one might think.

“Being a rookie in Cup is always hard, and no car is going to change that,” he said. “The drivers in the Cup Series are the best in the business. It’s going to be a transition period for them too, so this is the best time for me to make the transition to Cup.”