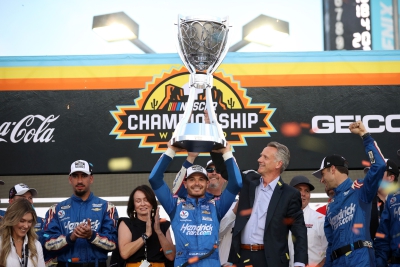 Kyle Larson, driver of the No. 5 Hendrick Motorsports Chevrolet in the NASCAR Cup Series, has been named the recipient of the Richard Petty Driver of the Year Award for 2021 by the National Motorsports Press Association.

The accomplishments that made Larson the overwhelming choice of the NMPA membership are many and varied. In the Cup Series, he won a career-best 10 races on the way to his first championship, which he sealed with a victory in the season finale at Phoenix Raceway. In addition to his accomplishments on pavement, Larson won three of the crown jewels of dirt racing—the Chili Bowl Nationals for midget racers (his second straight) and the Knoxville Nationals and Kings Royal for winged sprint cars.

“It’s an honor to receive the NMPA Richard Petty Driver of the Year Award,” Larson said. “2021 was a great year in all the different cars I got to race…

“I hope I can repeat this success year after year, but I know it’ll be tough. I also want to say thank you to the press and all the media members for covering the sport we all love—and look forward to a new year.”

The award was announced Sunday, Jan. 23 as part of the NMPA’s annual convention and awards ceremony held at the Hendrick Motorsports Team Center in Concord, N.C.

The Richard Petty Driver of the Year award has been presented annually since 1969 to recognize the season’s most outstanding driver. It is named in honor of the seven-time NASCAR premier series champion.