Almirola To Retire at End of 2022 Season; Smithfield Foods To Continue as Anchor Partner for No. 10 Team 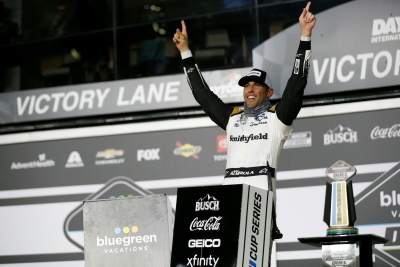 The 2022 season will be Aric Almirola’s 15th and final year as a NASCAR Cup Series driver. The 37-year-old racer will retire after the season finale Nov. 6 at Phoenix Raceway.

Longtime sponsor Smithfield Foods will continue as an anchor partner of Almirola and the No. 10 team of Stewart-Haas Racing (SHR), with 2022 marking the brand’s 11th year with Almirola and its fifth with SHR.

“I truly enjoy driving racecars and I’m excited to race my heart out in 2022 for Smithfield and Stewart-Haas Racing,” said Almirola, driver of the No. 10 Smithfield Ford Mustang. “But to be the best in this business, you’ve got to be selfish, and for the last 37 years my life has always revolved around me and what I needed to do.

“I want to be present. I want to be the best husband and father, and that to me means more than being a racecar driver. So, it’s one more year where I’m all in on racing, where we’ll do whatever it takes to compete at the highest level. But when the season is over, I’ll be ready to wave goodbye. I’ve loved every minute of it, but it’s time for the next chapter of my life.”

Almirola made his NASCAR Cup Series debut on March 11, 2007 at Las Vegas Motor Speedway, three days before his 23rd birthday. He teamed up with Smithfield in 2012 while at Richard Petty Motorsports for his first full year in Cup. The Smithfield/Almirola partnership is now one of the most tenured in NASCAR, and since the duo joined SHR in 2018, Almirola has represented Smithfield in the NASCAR Playoffs every year and scored two wins – Oct. 14, 2018 at Talladega (Ala.) Superspeedway and July 18, 2021 at New Hampshire Motor Speedway in Loudon.

“It’s been an absolute pleasure to have Aric as part of our Smithfield Family for more than a decade now,” said Shane Smith, president and CEO, Smithfield Foods. “In addition to being an incredibly talented racer and devoted family man, Aric embodies Smithfield’s values and has embraced our commitment to do good for our customers, employees and communities. He will always be family. We wish him all the best in his next chapter and look forward to another great year with him and Stewart-Haas Racing.” 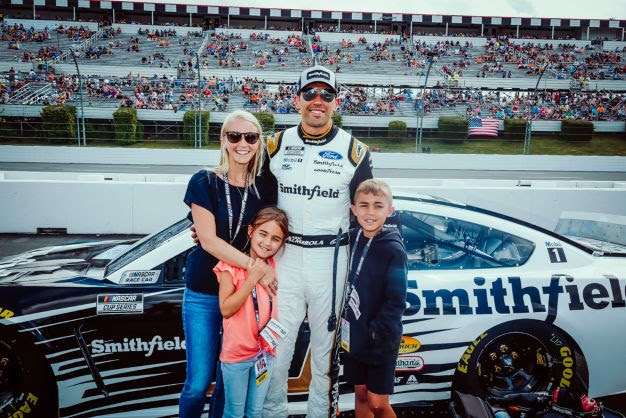 Almirola’s decision to make the 2022 season his last was pragmatic. The Tampa, Florida-native is a husband and father of two, and as he and his wife, Janice, looked at life beyond racetracks on Sundays, Almirola determined that stepping back from racing would allow him to take new steps with his children as they pursue dreams of their own.

“Janice and I have spent many nights talking about it and the questions are the same as anyone else would have when you’re going to stop doing something. Can I afford it? The answer I kept coming up with is that I can’t afford not to. Will I regret it? I think I’ll regret it if I don’t,” Almirola said.

Tony Stewart, co-owner of SHR with Haas Automation founder Gene Haas, first met Almirola in 2004 when they were teammates at Joe Gibbs Racing. Stewart was already a NASCAR Cup Series champion with the first of his three titles in hand (2002, 2005 and 2011) while Almirola was just beginning his NASCAR career after being selected as one of the first two drivers for Gibbs’ diversity program.

“I’ve watched Aric develop into a really good racecar driver and it was a proud moment when we were able to bring him to Stewart-Haas Racing,” Stewart said. “He’s really delivered for our race team and for Smithfield, always putting in maximum effort. I know he wants to go out on a high note and we’re going to give him all the resources to succeed.

“That being said, we also want him to enjoy this season. Aric is a great husband and father, and this year will bring a lot of cool moments that he’ll be able to share with his family. He’s earned this opportunity to go out on his terms.”

Almirola’s best seasons have come with SHR. He finished a career-high fifth in points in 2018 and scored a career-best 18 top-10 finishes in 2020.

“It means a lot to be able to walk away on my own terms. It’s been a great ride. I have been blessed beyond my wildest imagination and I honestly have no regrets,” Almirola said.

“I made it to the highest level of American motorsports as a professional racecar driver. It’s been amazing, with a lot of ups and downs and everything in between. I wouldn’t trade it for the world. But I’m ready to go back to being a fan.”

Almirola’s final season kicks off with the non-points Busch Light Clash at the Coliseum Feb. 5-6 at the Los Angeles Memorial Coliseum before the official start of the 2022 campaign with the 64th annual Daytona 500 Feb. 20 at Daytona (Fla.) International Speedway.