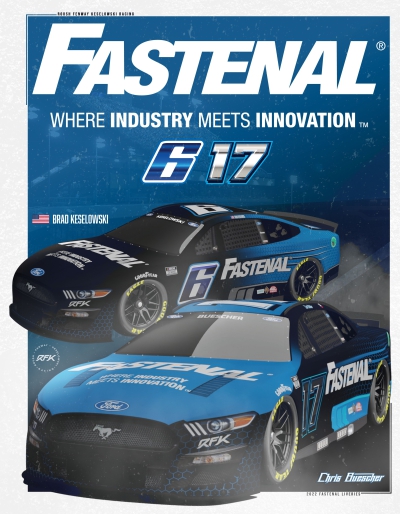 Fastenal – longtime anchor partner of RFK Racing – unveiled its 2022 paint schemes Tuesday, and with it announced multiple races with Brad Keselowski and the No. 6 team as part of the 12th year of the partnership.

RFK announced in May that Fastenal extended its relationship and will continue as the anchor on the No. 17 Ford driven by Chris Buescher for multiple years. The partnership now involves NASCAR Champion Keselowski, who will work with the company on and off the track. Tuesday’s unveil is the first for RFK with the Next Gen car, which will make its debut at The Clash at The Coliseum (Feb. 6, 6 p.m. ET, FOX) to kick off the 2022 campaign.

“Fastenal has been a driving force behind our organization for more than a decade now, and their dedication to step up and extend the partnership to Brad and the No. 6 team is just further proof of their commitment to not only our sport, but our team and its success,” said RFK Racing president Steve Newmark. “And, we’re excited to show the world our first scheme on a Next Gen car in a season that will have an unprecedented energy and attention with so many positive changes across the NASCAR landscape.”

Fastenal first joined the fold in 2010 as the primary partner on the No. 60 Xfinity Series (NXS) entry with driver Carl Edwards. That team went on to win the owners championship with Edwards in 2011. They later served as a primary on Buescher’s Championship-winning No. 60 entry in 2015. Overall, Fastenal has celebrated 71 top-10s and 45 top-fives aboard RFK Fords.

“The unveiling is always a fun event, and there’s even more excitement around it this year because of the Next Gen car,” said Dan Florness, Fastenal’s president and CEO. “After 12 years of working together, we’re looking forward to a successful next chapter in our partnership with RFK Racing.”

Keselowski, the 2012 NASCAR Cup Series Champion, enters his 13th full season in the series. He has been a consistent contender at the sport’s top level, qualifying for the NASCAR Playoffs in 11-straight seasons, finishing in the top-10 in nine of the last 11 campaigns, including a runner-up finish in 2020. Overall he holds 75 NASCAR wins including 35 in the Cup Series.

Fastenal has nine wins in more than 225 starts across the NASCAR Cup and Xfinity Series. Keselowski will become the ninth driver to pilot the iconic Fastenal blue scheme.