NASCAR celebrates the stars of 2021 in Nashville 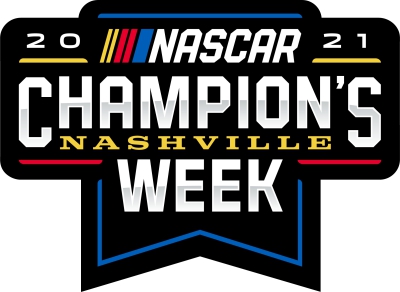 An abundant and enthusiastic welcome this week was punctuated by a packed ballroom and a litany of genuine feel-good moments as NASCAR celebrated and culminated its 2021 season with the Champion’s Week Banquet in Nashville on Thursday evening.

NASCAR Cup Series champion Kyle Larson and his No. 5 Hendrick Motorsports team was properly feted at the annual Awards Banquet at the Music City Center, with a racing A-list attending to celebrate the highlights of the 2021 NASCAR season – and three first-time national series champions.

“The numbers our champion put up this year were astounding," NASCAR President Steve Phelps said in comparing the 29-year-old Californian Larson to former legendary champions from Richard Petty and David Pearson to Jeff Gordon and Jimmie Johnson.

“This was his first [championship], but I’m sure it won’t be his last,"’ Phelps said as he introduced Larson.

After taking the stage, Larson promised not to get too emotional but the gratefulness was evident in his voice and on his face. He thanked his wife Katelyn, his team owner Rick Hendrick and team executive, former four-time champion and NASCAR Hall of Famer Jeff Gordon, recalling how he dressed up like Gordon for his first day of kindergarten and had always considered him his racing idol.

Larson thanked his sponsors and his fans, his longtime supporters that made the difference in him transitioning from the California short tracks to NASCAR’s big time, initially as a member of NASCAR’s Drive for Diversity class. And he concluded his speech, thanking team owner Chip Ganassi, who in 2012 gave Larson his first big NASCAR shot.

“I’m humbled to be standing up here in front of many of my heroes, friends and family tonight. As many of you know, my journey over the last year and a half to get to this stage hasn’t been easy," Larson said, before thanking his “best friend and wife Katelyn”

He continued, “I didn’t know at the moment but this hard times made me a better person and made us a stronger family. I’m lucky to spend this life with you Katelyn even though I’m not sure how I feel about you stealing the thunder in Victory Lane, shot-gunning your beers."

Larson spoke about how special it was to him to drive the No. 5 for Hendrick – the same car number and paint scheme that Hendrick’s late son, Ricky used. And he ended his speech thanking his former team owner Chip Ganassi, for giving him his first opportunity.

“I left there 20 minutes later realizing my life was going to change forever. Larson recalled of his first – and brief - meeting with Ganassi. “I will always cherish my years on your race team and forever be grateful for the risk you took on a young kid from the West Coast.”

Before Larson’s championship conclusion, the NASCAR industry celebrated each of the other national series champions – Ben Rhodes in the Camping World Truck Series and Daniel Hemric in the Xfinity Series.

“It’s been super humbling honestly," Elliott said of the award.

“The fans have been a huge part of my career and super proud to have that support and I enjoy trying to make them proud in the process."

Another annual award recognized during the main banquet is the prestigious Betty Jane France Humanitarian Award. This year it went to Jeff Harmon, of Louisville, Kentucky – a longtime volunteer with Down Syndrome Louisville.

Harmon, who has a 19-year-old son, Justin, with Down Syndrome, has worked with the organization for almost two decades and was extremely grateful for the award, mindful of the impact it will have. It started with only a handful of volunteers and now Harmon said the organization now serves more than 1,200 kids and families.

“It’s a huge benefit, to get $100,000 for one organization," Harmon said. “It really helps out. We’re going to use to use the money to spread out to help more people in the state and to the counties that can’t come to the city of Louisville. There’s a lot of rural counties in Kentucky so we’re going to reach out and try to expand our reach."

At the end of the evening, after the trophy photos, press conferences and speeches, Larson and Hendrick addressed the NASCAR media – the unmistakable feeling of gratitude evident as they closed out the celebration.