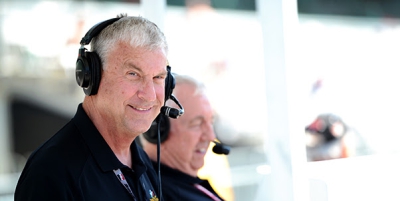 Presented annually since 1958, the award, named in honor of former NASCAR competitors Billy and Bobby Myers, recognizes individuals and/or groups who have provided outstanding contributions to the sport of stock car racing. Each year, the NMPA Myers Brothers Award winner is selected by a vote of the NMPA membership.

Jenkins, who passed away in August of 2021 at age 73 after a battle against brain cancer, was a fixture in ESPN’s NASCAR broadcast booth from 1979 through 2000, Initially, he teamed with Larry Nuber and later with NASCAR Hall of Famers Ned Jarrett and Benny Parsons to form one of the sport’s most revered broadcast teams.

A native of Richmond, Indiana, Jenkins got his start in motorsports broadcasting as an IndyCar pit reporter on radio and television. When ESPN debuted in 1979, Jenkins was one of the first anchors for the new sports network, where he worked until 2003.

After leaving ESPN, Jenkins joined the staff at Indianapolis Motor Speedway, filling roles as a public address announcer and press conference emcee. Subsequently, he returned to the IndyCar broadcast booth with Versus and retained the role as chief IndyCar announcer when Versus was acquired by NBC Sports Group.

In 2019, Jenkins was inducted into the Indianapolis Motor Speedway Museum’s Hall of Fame, along with driver Dan Wheldon.