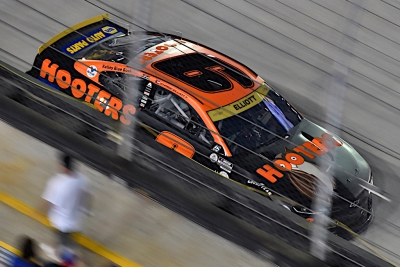 With a new three-year contract, Hooters has extended its primary sponsorship of 2020 NASCAR Cup Series champion Chase Elliott and his No. 9 Chevrolet Camaro ZL1 team fielded by Hendrick Motorsports.   Hooters, the iconic American restaurant brand with a deep history in NASCAR, will continue to be a primary sponsor of Elliott for three races each season through 2024. The company joined 14-time NASCAR Cup Series champions Hendrick Motorsports as a two-race primary sponsor of Elliott in January 2017 and added a third race beginning in 2019.   In 2022, the No. 9 Hooters Chevrolet Camaro ZL1 will appear June 5 at World Wide Technology Raceway and in the NASCAR Cup Series playoff races at Bristol Motor Speedway on Sept. 17 and Las Vegas Motor Speedway on Oct. 16.   “For five seasons, Chase has been a brand champion for Hooters both on and off the track, and we are thrilled to extend our partnership with him and Hendrick Motorsports,” said Hooters vice president of brand marketing Monica Fleury. “As the home of race fans, Hooters will continue to provide one-of-a-kind experiences fans can only get at our restaurants. Both Chase’s fan base and NASCAR fans are extremely loyal, and we plan to continue to feed this spirit and passion for years to come.”   Hooters, “The Official Home of Race Fans,” has made Elliott a cornerstone of its marketing efforts. The driver is consistently featured in the company’s national advertising with a variety of special offers and promotions tied to the No. 9 racing program.   “Hooters has been a fun partner to work with over the years,” Elliott said. “They’re a laid-back group that does a great job of promoting their brand and including our team as a big piece of their marketing. They do a lot with each of their three primary races but also make the most of the partnership throughout the entire season. The next several years will be exciting for our team and for the sport, and I’m glad to have Hooters back on board for the ride.”   Elliott, who turned 26 on Sunday, has never missed the Cup Series playoffs in his six full seasons at NASCAR’s top level. The Dawsonville, Georgia, native earned rookie of the year honors in 2016 and secured his first Cup championship in 2020. He has already won 13 career points-paying races, including two in 2021 when he appeared in the Championship 4 for the second consecutive season.   “Hooters does a terrific job maximizing the program with Chase and the No. 9 team,” said Rick Hendrick, owner of Hendrick Motorsports. “To see our partnership deliver valuable results for them is very rewarding. Chase is a champion driver and tremendous spokesperson for the brand, and we look forward to building on that success in the seasons to come.”