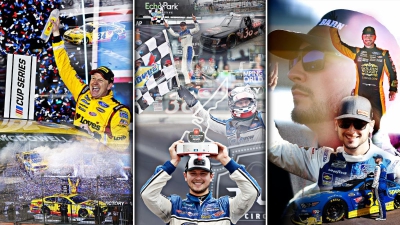 Beyond the organizations two wins, FRM earned continued respect on the track through its most top-10 finishes ever in the NASCAR Cup Series and NASCAR Camping World Truck Series. McDowell and the No. 34 Ford Mustang team led the way in the Cup Series with five top-10 and two top-five results. McDowell ended the year 16th in the championship.

Gilliland led FRM to a new high mark in its second year in the truck series. The team dominated the field at the inaugural event at the Circuit of The Americas and also earned 16 top-10 and 10 top-five finishes to end the season seventh in the championship standings.

"We are very pleased with the progress that both our programs made on the track this season," said Jerry Freeze, General Manager, Front Row Motorsports. "We feel our organization took another step in being more competitive and giving more value to our partners. We still need more consistency, but we can't take anything away from the success and hard work from the organization this year. We're very proud of that effort."

Moving into 2022, FRM will continue its efforts in the NASCAR Cup Series and will field the No. 34 and No. 38 Ford Mustangs. The organization continues to analyze its NASCAR Camping World Truck Series operation and Anthony Alfredo will explore other opportunities.

"We would like to thank Anthony for being an outstanding ambassador of our team as well as for our No. 38 partners," said Freeze. "He showed a lot speed in what was very difficult circumstances. He is a true professional and we wish him nothing but success in his future racing endeavors."

FRM will make further driver and partner announcements when finalized as the team continues to build it's fleet of Next Gen Mustangs and prepares to test on the track.

"We will have a very busy next three months as we build for 2022," concluded Freeze. "Our men and women are working hard as we usher in the next generation of NASCAR. It's an exciting time and we are embracing the challenge and excitement."