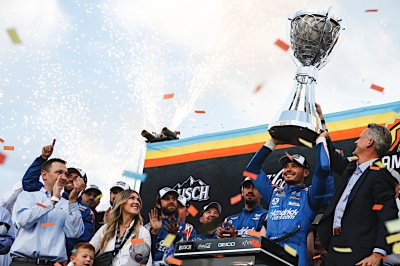 At the end of an almost mythical season came the quintessential story of redemption.

Taking advantage of an opportune caution and a blazingly fast pit stop by his No. 5 Hendrick Motorsports Chevrolet crew, Larson held off Martin Truex Jr. during a 24-lap green-flag run to the finish in Sunday’s NASCAR Cup Series Championship Race.

The victory—Larson’s 10th of the season and the 10th at a track where he had never won before—made a deserving series champion of the 29-year-old Californian, who honed his racing skills in open-wheeled cars on dirt.

As Larson slowed his car for the cool-down lap, the tears started flowing.

“I can't… I cannot believe it,” Larson said after climbing from his car. “I didn't even think I'd be racing a Cup car a year and a half ago. To win a championship is crazy. I've got to say first-off thank you so much to (team owner) Rick Hendrick, Hendrickcars.com, Jeff Gordon, NASCAR, every single one of my supporters in the stands, watching at home and my family.

“There were so many points in this race where I did not think we were going to win. Without my pit crew on that last stop (on Lap 285), we would not be standing right here. They are the true winners of this race. They are true champions. I'm just blessed to be a part of this group. Every single man and woman at Hendrick Motorsports, this win is for all of us, and every one of you.

“This is unbelievable. I'm speechless.”

This was the Kyle Larson who watched last year’s Cup championship race from afar after drawing a suspension from NASCAR and losing his ride with Chip Ganassi Racing for using a racial slur during a non-NASCAR-related virtual race in April 2020.

But after Larson did yeoman work to earn reinstatement, team owner Rick Hendrick hired the virtuoso driver, who won 46 dirt races in multiple divisions during his absence from NASCAR.

Hendrick’s decision paid immediate dividends and culminated in the 14th series championship for the organization (series-most).

Until Lap 282 of 312, however, Larson’s chances of victory were all but nonexistent. He was fourth among the Championship 4 drivers and trailing Truex, the leader at the time, by more than four seconds.

But on the lap that changed the race, the brakes in David Starr’s exploded and dropped a rotor in the low lane in Turn 3. Under the resulting the caution, the ninth of the race, Larson’s crew performed its second-fastest stop of the year and got Larson off pit road in the lead from pit stall No. 1, which the driver had earned by winning the pole during Saturday’s qualifying.

Larson restarted from the outside on Lap 289 with Hamlin beside him. Truex, who lost two positions on pit road, lined up behind Larson, with defending Chase Elliott to his inside. Larson surged into the lead, and Truex followed, passing Hamlin.

Truex contested the lead early in the run before Larson established a more comfortable margin. But Truex was closing at the finish and was just .398 seconds behind when Larson crossed the stripe for the final time to earn the 16th victory of his career.

“I don't know what the caution was for, but just untimely caution for us and lost two spots on pit road, and that was the race,” Truex said. “Twenty (laps) to go, you're not going to pass one of the fastest cars out there. We just didn't have the short-run speed all day, and then certainly with 20 to go, it's going to be hard to pass anybody out front in clean air.

“I think if we would have had the lead, we could have held him off. But hindsight is 20-20, and we didn't have the lead, so here we are. Really proud of our team and our season. Come in here once again as underdogs and had a shot at it, so that was fun.”

Before the Lap 282 caution Hamlin’s No. 11 Joe Gibbs racing Toyota was closing on Truex, but the yellow flag foiled a well-executed game plan by Hamlin’s team.

“I really liked where we were at with about 25 to go,” said Hamlin, who came home third in front of Ryan Blaney and Elliott. “We were just exceptional in the long run, which wasn't too surprising, but started running the 19 (Truex) back down there and got within a couple car lengths, and obviously that debris caution changed a lot.

“Special congrats to Larson and his team. Those guys, any time you can win 10 races in a year, you're absolutely a deserving champion. They did a great job on the last pit stop and got him out there, and it was just set sail after that.”

Had he won, the 25-year-old Elliott would have become the youngest driver to win multiple Cup championships, but his No. 9 Hendrick Motorsports Chevrolet didn’t have either the track position or the necessary speed in the final run.

“I felt like our NAPA Chevy was really good, and I thought our team did a really good job preparing this week,” said Elliott, who led 94 laps, second only to Larson’s 107. “I was really proud of our group. I thought we brought a really good car and did a lot of things that we were wanting to do today. Just didn't work out, and the sequence of the way all that went certainly was unfortunate for us.

“But look, proud of our team, a lot to build on, and also congrats to Kyle and (crew chief) Cliff (Daniels). What an amazing season. Very, very deserving champions, and glad to see Kyle have success. When you're a good driver and a good person, and you surround yourself with good people, success is warranted. It's good to see that.

“But we'll be back stronger next year and try to give them a run.”