Custer Rallies for 13th at Phoenix 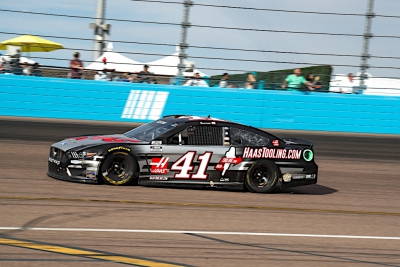 ● The No. 41 HaasTooling.com Ford Mustang fired off tight at the beginning of the 312-lap race at Phoenix. Custer reported that he struggled with his racecar in turn three. He fell back to 16th before the caution came out on lap seven.

●  Crew chief Mike Shiplett made the call to keep his driver out on track during the initial caution to stay on a similar pit strategy to the leaders.

●  The yellow flag came out just three laps after the lap-12 restart while Custer was running 13th. He pitted for four tires, fuel and a minor adjustment to combat a tight Ford Mustang.

●  As the rest of the stage went caution-free, Custer worked his way all the way up to seventh, where he finished the stage.

●  During the stage break, the 23-year-old driver reported that his car was good but could be tightened up a bit after the last run. The No. 41 HaasTooling.com team pitted for four tires, fuel and a trackbar adjustment.

● The Ladera Ranch, California, native struggled with the short-run speed on his Ford Mustang during the opening laps of the second stage.

● When the caution came out on lap 129, the No. 41 HaasTooling.com driver was running 12th. The team took the opportunity to pit for four tires, fuel and a minor adjustment.

● Custer reported during the lap-154 caution that his Ford Mustang was “building tight.” The team pitted again for four tires, fuel and another minor adjustment.

● As the stage continued, the No. 41 HaasTooling.com driver was unable to overcome the balance issues and finished 18th.

● The team pitted during the stage break for four tires, fuel and an adjustment.

● After the initial restart of final stage, the No. 41 HaasTooling.com Ford Mustang fell back to 23rd as Custer continued to struggle with the balance of his racecar.

● The 23-year-old driver broke back into the top-20 by lap 202 and continued to gain spots from there. He was quiet on the radio during the opening laps and worked his way up to 15th before green-flag pit stops began.

● On lap 245, Shiplett called the No. 41 HaasTooling.com Ford Mustang to pit road for a scheduled stop to put on four fresh tires, fill up on fuel and make another small adjustment. Unfortunately, the caution came out just three laps later while Custer was running 24th, one lap down. The team took the wave-around under caution to get its lap back.

● Custer restarted 24th on lap 255. He raced up to 20th by the time the caution came out again on lap 283. The No. 41 HaasTooling.com driver came to pit road for a trackbar adjustment and four tires. He restarted 18th.

● Custer earned his eighth top-15 of the season and his second top-15 in four career NASCAR Cup Series starts at Phoenix.

●  Kyle Larson won the Season Finale 500 to score his 16th career NASCAR Cup Series victory, his series-high 10th of the season and his first at Phoenix. His margin over second-place Martin Truex Jr., was .398 of a second.

●  Larson earned his first NASCAR Cup Series championship by virtue of his win. He is the 35th different driver to win the series title.

●  There were nine caution periods for a total of 51 laps.

“We started off strong today and finished in the top-10 in the first stage but then started to really struggle with the balance on our racecar in the second stage. That caution during green-flag pit stops in the final stage put us back, but we were able to recover for a top-15. Thankful for the support this season from all of our sponsors, Ford Performance and SHR. We learned a lot this season and will continue to build in 2022.”