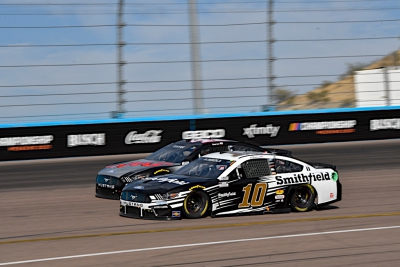 ● Almirola raced the Smithfield Ford Mustang to 14th before a caution on lap 15.

● He pitted for four fresh tires and fuel to restart 20th due to multiple cars staying out of the pits.

● The Smithfield driver continued to advance, but he said he could use more side bite and turn in the middle of the exit.

● Almirola pitted at the end of the stage for four tires, fuel and chassis adjustments.

● Almirola pitted for four tires, fuel and adjustments during a lap-130 caution.

● He restarted 12th and raced back to ninth before another caution on lap 140.

● Almirola was served a speeding penalty on pit road and was forced to restart at the rear of the field.

● The Smithfield driver raced all the way back inside the top-15 by the end of the stage.

● He pitted at the end of the stage for four tires, fuel and air pressure adjustments.

● Almirola raced back inside the top-10 on the restart and had advanced to seventh on lap 238.

● A caution was called on lap 248 with Almirola in the fifth position.

● The Smithfield driver restarted seventh and was scored eighth before another caution on lap 281.

● He pitted for four tires, fuel and an air pressure adjustment and restarted fifth.

● The No. 10 Smithfield driver raced in and around the top-five before the checkered flag waved.

● Almirola earned his fifth top-10 of the season and his seventh top-10 in 22 career NASCAR Cup Series starts at Phoenix.

● This was Almirola’s second straight top-10. He finished sixth in the series’ prior race at Martinsville (Va.) Raceway.

● This was Almirola’s fourth straight top-15 at Phoenix. He finished 11th in the series’ prior visit to the track in March.

● Kyle Larson won the Season Finale 500 to score his 16th career NASCAR Cup Series victory, his series-high 10th of the season and his first at Phoenix. His margin over second-place Martin Truex Jr. was .398 of a second.

● Larson earned his first NASCAR Cup Series championship by virtue of his win. He is the 35th different driver to win the series title.

● There were nine caution periods for a total of 51 laps.

“What a season. What a day. We worked so hard to finish off the season strong, and we ran where this 10 team was capable of running all year. It was such a rollercoaster of a year. We had some really high highs and really low lows. We capped off the season with two sixth-place finishes when we’re running in the midst of the championship-contending playoff drivers, and I can’t be prouder of that after the year we’ve had.”