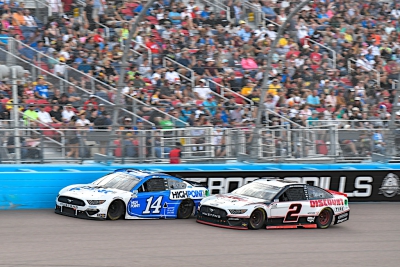 ● During the first caution on lap seven, Briscoe reported his HighPoint.com Mustang felt solid on the short run. He restarted 18th on lap 12 and was running 16th when the second caution occurred on lap 16.

● Briscoe pitted under yellow on lap 17 for tires, fuel and an air pressure adjustment to help with drive off the exit of turn two. He restarted 22nd on lap 21.

● The Cup Series rookie gradually pushed forward through the remainder of the first stage. He finished Stage 1 in the 14th position on lap 75.

● At the stage break, Briscoe pitted for tires, fuel and another air pressure adjustment to help with turn in the center of the corner.

● The HighPoint.com driver began the second stage in the 10th position and was running 13th when the fourth caution occurred on lap 130. Briscoe pitted for tires, fuel and adjustments to free up the No. 14 Ford Mustang in the center of the corner.

● Quick work from the pit crew gave Briscoe a fifth-place spot for the lap-136 restart, and the driver from Mitchell, Indiana, held his position in the top-10 for several laps.
● Briscoe reported his Ford Mustang was struggling in the top lane after falling outside the top-10 on lap 146. Just eight laps later, while battling with Kyle Busch for the 12th position, Briscoe’s Ford Mustang got loose entering turn three as the result of a cut left rear tire and made hard contact with the outside wall. Severe damage ended his day with only 153 laps complete.

●  When the checkered flag dropped on the Season Finale 500, Briscoe was officially named the 2021 NASCAR Cup Series Rookie of the Year. Briscoe was the highest-finishing rookie 29 times this season.

●  Briscoe is one of only three drivers to win the rookie-of-the-year title in all three of NASCAR’s top national touring series – Camping World Truck (2017), Xfinity (2019) and Cup (2021). He joins William Byron and Erik Jones.

●  Kyle Larson won the Season Finale 500 to score his 16th career NASCAR Cup Series victory, his series-high 10th of the season and his first at Phoenix. His margin over second-place Martin Truex Jr., was .398 of a second.

●  Larson earned his first NASCAR Cup Series championship by virtue of his win. He is the 35th different driver to win the series title.

●  There were nine caution periods for a total of 51 laps.

“We had a really, really good long-run HighPoint.com Mustang, but our short-run speed, we were just trying to hang on. We were three-wide one time off of turn four and the 18 got into me a little and gave it a little bit of a tire rub. I think he was getting frustrated because I was just trying to hold those guys up as long as I could, because I knew if I made it 15 laps I would be OK. He got into me into (turn) three. I feel like, at the same time, my left-rear tire cut. I don’t know if that was from the damage earlier and then when he got into me the second time it finally cut it or what. At that point, I was along for the ride. It is super unfortunate. We had a top-10 car, and if we could have had some long runs maybe even a top-five car. We went all year long and never crashed a car, so to end it on the last one like that is unfortunate. You always want a good run at the end of the season to build momentum into the off-season. You just want to have good runs every week. I hate it that it ended this way, but I am looking forward to the future and everything that entails.

“It’s definitely cool to end the season as Rookie of the Year and to have that in all three series. I definitely had higher expectations coming into this year, but it was a weird year. As a company, we struggled way more than we thought we would. You base your expectations off of last year, and we just weren’t quite there from a performance standpoint, so you alter those expectations a little bit. The 14 team was competitive in a couple of races and battling for a few wins and top-fives. I think we have proved that whenever we get the car driving right and have the speed, we are fully capable of running up front with those guys. I wouldn’t say the season was a thumbs up or a thumbs down, maybe somewhere in the middle. There is still a lot that I have to learn to do better. The Cup Series guys are so good. You have to be on it 100 percent and clean up a lot of little things. I feel like going into the Next Gen car it will be nice to have a year under my belt and know all the little things to work on during the off-season to try to apply to next year.”