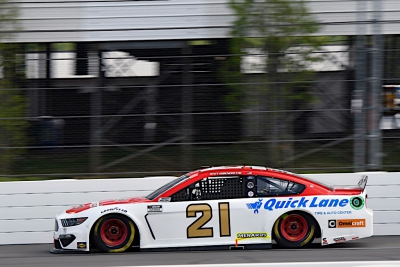 In his two years behind the wheel of the iconic No. 21 Mustang, DiBenedetto has scored six top-five and 20 top-10 finishes. He led 98 laps last year and 68 this time around, pushing the Wood Brothers past the 25,000 milestone for overall laps led.

DiBenedetto scored his career-best points finish of 13th last year, and enters Sunday’s race in 19th place and is assured of topping all his points finishes prior to joining the Wood Brothers team.

“This will be an emotional week for me,” DiBenedetto said. “I have genuinely appreciated every single time I’ve stepped foot in the 21 car.

“I have always been a fan of the sport. I’m a first-generation racer. I didn’t have funding behind me, and if you told me as a kid that one day I would drive the 21 for the Wood Brothers I would have freaked out and wouldn’t have been able to believe it.

“The amazing thing is that the Wood Brothers will be family for life, and I’m so thankful for them.

“I’m hoping we close out the year strong.”

Eddie Wood said he and his family appreciate all the effort DiBenedetto has put in during the past two years.

“We all thank Matt for his hard work and dedication,” Wood said. “Like all the drivers who have come before him, Matt will remain part of our history, and although this chapter is ending he’ll always be a part of the Wood Brothers racing family.”

Wood also offered thanks to the crew chiefs who have worked with DiBenedetto over the past two seasons.

“Jonathan Hassler and Greg Erwin served us well the past two years,” Wood said. “We couldn’t do what we do with the efforts of people like Matt, Jonathan and Greg.

“And we can’t say enough about the support we get from our sponsors, Motorcraft and Quick Lane as well as the Menards family and their vendors who have backed the No. 21 Mustang.”

Wood also offered his appreciation for his team’s alliance with Team Penske, and the contributions from Ford Performance and Roush Yates Engines.

“It’s been a good couple of years,” Wood said.

Unlike most Cup Series races this season, there will be practice and qualifying prior to the start of Sunday’s 312-lap NASCAR Cup Series Championship. A practice session is set for Friday at 1 p.m. (4 p.m. Eastern Time). Qualifying is scheduled for Saturday at 4 p.m. (7 p.m. Eastern), and Sunday’s race is set to get the green flag just after 1 p.m. (3 p.m. Eastern), with TV coverage on NBC.