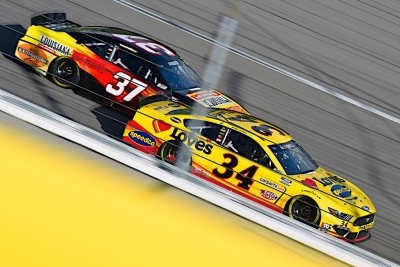 It's another homecoming race weekend for Michael McDowell as he heads west to Arizona for the 2021 NASCAR Cup Series season finale at the Phoenix Raceway.

Joining McDowell aboard his No. 34 Ford Mustang is Love's Travel Stops and their valued partner, Chevron Delo.

McDowell heads into Sunday's Championship race with a lot to reflect on as the 14-year Cup veteran has had the best season of his career thus far; earning five top-10's, two Top-5's and one victory, which came in the 63rd running of the DAYTONA 500. "I'm really looking forward to heading back to Phoenix Raceway this weekend for the NASCAR Championship," said McDowell. "Phoenix is always a special race for me because I get to race in front of so many friends and family members, and the cheers are usually a little bit louder during driver intros, too."

McDowell reflected on his 2021 season by saying, "even though we're not racing for a championship, we've still had an incredible season and have been more competitive than ever before." McDowell added, "I can't thank all of our partners enough for everything that they've done for us this year and I'm proud to have been able to capture a DAYTONA 500 victory for so many of them."

Michael McDowell has a career-best finish of 16th at the Phoenix Raceway and looks to close out his season by delivering another strong performance for Love's Travel Stops and all of his partners.