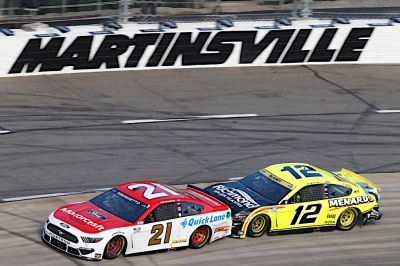 After a frustrating start that saw them fall two laps off the pace, Matt DiBenedetto and the No. 21 Motorcraft/Quick Lane team battled back late in Sunday’s Xfinity 500 at Martinsville Speedway and came away with a 15th-place finish.

DiBenedetto lined up 21st for the start of Sunday’s race, which was run in front of a strong crowd surrounding the venerable half-mile track.

The Motorcraft/Quick Lane Mustang wasn’t at its best initially, and DiBenedetto fell a lap down after just 51 laps. He ended the first 130-lap Stage in 27th place, two laps behind the leaders.

The team used the wave-around to rejoin the lead lap at the start of the second Stage, but the struggles continued and he again went two laps down.

After several adjustments to the Motorcraft/Quick Lane Mustang, the tide began to turn, and 358 laps into the race DiBenedetto was finally back on the lead lap and showing good speed.

The team’s troubles weren’t over, as DiBenedetto was penalized a lap for pitting outside his pit box. When he rejoined the race, he was nearly two laps down, but held on and waved around to the lead lap with 60 circuits remaining.

In the closing laps, with mayhem occurring in front of and behind him, DiBenedetto worked his way into the top 20 and then picked up five more spots, including one in an overtime run to the checkered flag, to finish 15th.

“It was a very long day,” DiBenedetto said. “With no practice we weren’t where we needed to be at the start of the race, so we had to work really hard adjusting on the car.

“We just didn’t have the strength we normally have at Martinsville. We got two laps down, then had a penalty for pitting outside the box, but we got back on the lead lap and got a 15th for the day.

“It was definitely eventful from start to finish, but as incredibly messy as it was in the beginning, we were able to fight back, get a decent finish that we’ll take and move on to the next one.”

DiBenedetto and the No. 21 team will close the 2021 season in next Sunday’s finale at Phoenix Raceway.