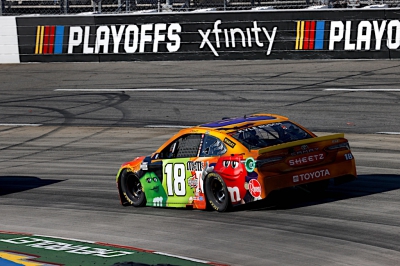 Point Standing: 9th (2,285 points, Does Not Advance to Championship 4)

● The M&M’S Halloween driver was running fifth when the yellow flag was shown on lap 60 for the competition caution. He pitted for tires and an adjustment to help with tire chatter in the turns and restarted seventh on lap 68.

● On lap 126, Busch reported he needed more rear grip. He finished the stage in the sixth position and pitted at the break for tires and another chassis adjustment.

● The M&M’S Halloween driver began the second stage in third, but he said his racecar was still lacking rear grip early in the run.

● When the caution came out on lap 198, Busch was running fifth. He visited pit road for fresh tires and a major adjustment to help with the handling of his Toyota Camry, then lined up fifth for the lap-204 restart.

● On lap 237, Busch radioed that the M&M’s Halloween Toyota didn’t have the forward drive to hold off competitors on corner exit.

● Busch finished the stage in ninth and pitted under caution for adjustments and tires. The No. 18 was assessed a pit road speeding penalty, relegating Busch to 20th for the start of the final stage.

● The Las Vegas-native was mired in 17th after beginning the final stage in 20th. A caution on lap 339 allowed the M&M’s Halloween team to pit for fresh tires and adjustments, and Busch restarted just outside of the top-10.

● Busch continued to fight a tight-handling Toyota until making his final pit stop of the day on lap 437. He restarted sixth, but a series of cautions slowed his progress.

● Following another caution on lap 473, the M&M’s Halloween driver restarted fifth and made his way into the top-three.

● A caution with five laps remaining saw Busch in the second position with a chance to win and advance to the Championship 4 at Phoenix, but he was unable to get a jump on the restart and crossed the line in the runner-up position.

“We just missed last week. That's where we lost all the ground. Could have come in here with 15 more points, we would have been fine on the cut. Just wasn't it. Wasn't meant to be. Obviously it was Truex's day. We had a Hail Mary opportunity there at the end. Just didn't materialize. All in all, just proud of the effort for sure. We slung everything and anything at this thing M&M’S Halloween Camry today, couldn't really make it come alive. Great effort. That was there for sure. We just got to get better, everybody included, the whole team, in order to be able to go race with the best and race for a championship. We're not going to do that this year.”