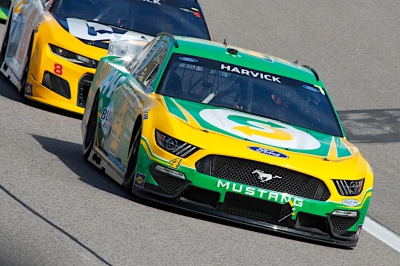 ●  Harvick wheeled his No. 4 Subway Delivery Ford Mustang into the eighth spot by lap 10 just before the race was red-flagged for a brief rain shower. Racing resumed on lap 16.

●  When the competition caution came out on lap 24, Harvick reported his car was “just too tight everywhere.”

●  Pitted for four tires and fuel during the competition caution.

●  Lined up 16th for lap-28 restart as some drivers took fuel only during their respective pit stops.

●  Harvick cracked the top-10 on lap 33 when the cars of Martin Truex Jr., and Brad Keselowski got out of shape in front of him.

●  “I need the front to turn better, but I can’t afford to lose any more rear grip,” said Harvick while running fifth on lap 63.

●  Harvick finished the stage in sixth, whereupon he keyed the mic and said, “The longer we ran, the worse it got.”

●  Pitted for four tires and fuel with a slight tire pressure adjustment at the end of the stage.

●  Harvick picked up fourth place just after the restart and then settled his No. 4 Subway Delivery Ford Mustang into the fifth spot.

●  “I’m tighter taking off more than I was the run before,” said Harvick on lap 98 after dropping to sixth.

●  Made scheduled, green flag pit stop for four tires and fuel with a left-rear wedge adjustment on lap 121.

●  After pit stops had cycled through by lap 147, Harvick was up to fifth.

●  Harvick held onto fifth through the end of the stage, but radioed that while his car was better, it was still too tight from the center of the corner off.

●  Pitted for four tires and fuel with a slight tire pressure adjustment at the end of the stage.

●  Harvick drove his No. 4 Subway Delivery Ford Mustang into a battle for the lead by lap 170, racing with leader Kyle Larson, William Byron and Tyler Reddick.

●  Harvick was third when the caution came out on lap 174. “Definitely took off better,” he said, “but still a little too tight.”

●  Took advantage of caution and pitted for four tires and fuel with a slight tire pressure adjustment on lap 175.

●  Harvick grabbed third on lap 187 from Larson and then followed in the tire tracks of second-place Kurt Busch.

●  Pitted for four tires and fuel with a tire pressure adjustment during caution period on lap 219.

●  Lined up second on the inside of leader Busch for lap-223 restart.

●  Caution came out on lap 225 and Harvick was fourth after some three-wide jockeying for the lead among Chase Elliott, Larson and Busch.

●  Race restarted on lap 229 and Harvick was fourth, the second car on the inside lane behind leader Elliott.

●  Harvick swept around Elliott on the apron just before turn one while Larson went high to take the lead. Harvick ended up second.

●  Some slight right-front damage was sustained, but Harvick persisted, getting right behind Larson on lap 234 and pressuring him for the lead.

●  Harvick ran a comfortable third for the remainder of the race, crossing the stripe with a more than two-second advantage over fourth-place Busch.

●  This was Harvick’s third straight top-three at Kansas. He scored runner-up finishes in his prior two visits to the track.

●  This was Harvick’s second straight top-five. He finished fifth in the series’ prior race at Texas Motor Speedway in Fort Worth.

●  Larson’s win in the Hollywood Casino 400 was his 15th career NASCAR Cup Series victory, his series-leading ninth of the season and his first at Kansas. His margin over second-place Elliott was 3.619 seconds.

●  There were seven caution periods for a total of 33 laps.

“We were just getting tight at the end of the runs and the 5 (Larson), 9 (Elliott) and 1 (Busch) cars could really hold it wide open. I needed to get past the 5 so I was trying to hold it wide open and had a lot of wheel into it and got a little tight as we went to the last half of that run. I’m really proud of everyone on the Subway Delivery Ford Mustang. We closed a huge gap at 1.5-mile racetracks and everyone is doing a great job.”

The next event on the NASCAR Cup Series schedule is the Xfinity 500 on Sunday, Oct. 31 at Martinsville (Va.) Speedway. It is the penultimate race of the 10-race playoffs and the final race in the Round of 8. It starts at 2 p.m. EDT with live coverage provided by NBC and SiriusXM NASCAR Radio.