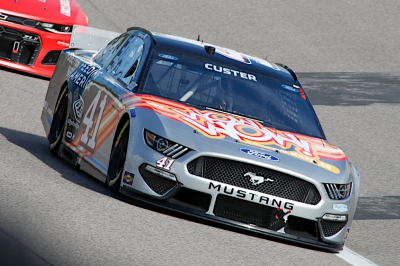 ● The No. 41 Feeding America®/Wow Wow Classic Waffles Ford Mustang driver made steady forward progress from the drop of the green flag, working his way up to 16th by lap five. He said his racecar was “pretty good here, maybe a tick tight.”

● He dropped a pair of positions by the time the caution flag flew on lap 10 for light rain. The race was then red-flagged for 15 minutes, 46 seconds for lightning in the area.

● Custer restarted 17th when the race went back to green on lap 15 and had picked up a position when the caution flag flew again on lap 22 for a single-car incident in turn one. He pitted for four tires and a trackbar adjustment, and restarted 19th on lap 26.

● The stage stayed green the rest of the way, and Custer again was able to make steady forward progress. He was up to 15th by lap 44 and had gained three positions by stage’s end. He said his Feeding America®/Wow Wow Classic Waffles Ford Mustang was “pretty good, for the most part, just could use a little rear grip so I can fight up there with the others in the top-10.” He pitted during the break for four tires and another trackbar adjustment.

● The No. 41 Feeding America®/Wow Wow Classic Waffles Ford dropped a pair of positions in the opening laps of the stage, “a little bit tight right here,” Custer reported. He held his relative position until the field began cycling through green-flag pit stops midway through the stage. Custer was 12th before making his trip down pit road on lap 120 for four tires, fuel and a trackbar adjustment.

● Custer was 17th on lap 132 with all but a handful of cars ahead of him having made their green-flag stops. “Feels like this is a lot better direction,” he said. “I can turn the center better. It helped the rear grip a little bit, but I feel like we could use a little more.”

● He picked up a pair of positions by the end of the stage, then pitted during the break for four tires, fuel and another trackbar adjustment.

● The No. 41 Feeding America®/Wow Wow Classic Waffles Ford was 17th when the caution flag flew on lap 173 for a single-car incident on the frontstretch. Custer said his racecar fired off “a little too free,” so he pitted for four tires, fuel and air-pressure adjustments. He restarted 18th on lap 178.

● The caution flag flew on lap 218 for a single-car incident in turn two with Custer running 16th. He said he still needed help with rear grip over the long run and help firing off on the restart. He pitted for four tires, fuel and adjustments and restarted 18th on lap 222.

● The caution flag flew once again just two laps later for a two-car incident in turn two with Custer running 18th. Having driven through debris from the accident ahead of him, he pitted for four fresh tires and restarted 19th on lap 227.

● Custer picked up one position on his way to the checkered flag.

● Kyle Larson won the Hollywood Casino 400 to score his 15th career NASCAR Cup Series victory, his series-high ninth of the season and his first at Kansas. His margin over second-place Chase Elliott was 3.619 seconds.

“I felt like we had a good car, better than we’ve had, and our Feeding America®/Wow Wow Classic Waffles Ford team did a good job of making it better today. It wasn’t perfect, by any means, but we just needed a little better luck getting the Lucky Dog so we could go racing there at the end. But it was a good job by everyone today.”