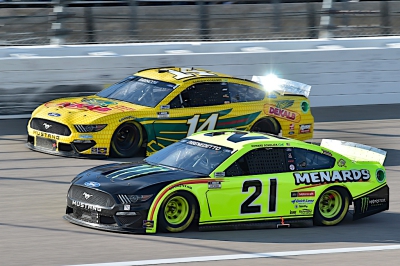 Matt DiBenedetto and the No. 21 Menards/Monster team struggled from the green flag to the checkered in Sunday’s Hollywood Casino 400 at Kansas Speedway.

After starting 15th, DiBenedetto was able to basically maintain his spot in the running order in the opening laps, but the No. 21 Menards/Monster Mustang wasn’t driving to his liking.

By the end of the first 80-lap Stage he’d fallen to 22nd place, one lap behind the leaders.

Stage Two didn’t go any better, as adjustments to the No. 21 Mustang didn’t result in more speed. DiBenedetto closed out that 80-lap segment still in 22nd place but fell another lap behind.

With few opportunities to use the wave-around to regain the lost laps, the final segment saw more of the same for the Menards/Monster team, and DiBenedetto ended the race in 23rd position.

“We just missed it today,” DiBenedetto said. “We were way off on our setup and had to live with it. With no practice, that’s bound to happen on occasion.”

The fact that DiBenedetto and the Menards/Monster team never gave up despite the disappointing results showed the kind of determination that led the family of Cancer Hero Howard Scholick to nominate Scholick to be honored by the No. 21 team during Sunday’s race.

Scholick, of Columbia, Md., was nominated by his son-in-law Scott Townsend as part of a program put on by the Martin Truex Jr. Foundation, the NASCAR Foundation and AdventHealth. His name was placed on the No. 21 Mustang in the spot normally taken by DiBenedetto’s name.

Townsend said he chose DiBenedetto and the Wood Brothers because of the way the driver and team never give up despite the situation they find themselves in.

Eddie Wood said that while he and the team had hoped to deliver a better result in Scholick’s memory, he was proud that the team never stopped trying to improve their car.

“In this sport, you’re going to have days where things just don’t work out, but we owe it to the people who support us to try and make the best of every situation,” Wood said. “We did that today, and now we have to put this one behind us and move on.”

DiBenedetto and the No. 21 team now head to the Woods’ home track, Martinsville Speedway, for next Sunday’s Xfinity 500.