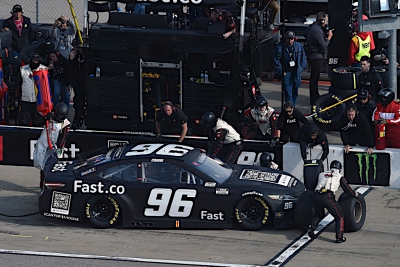 ● The No. 96 Fast Checkout Toyota driver raced his way up to 32nd before rain brought a caution out on lap 11. NASCAR brought the cars down pit road for a red flag for 15 minutes, 46 seconds, due to lightning in the area.

● Kligerman restarted 26th when the weather passed and the race went back green on lap 16. He was running 29th when the competition caution came out on lap 24.

● During the competition caution, the No. 96 Fast Checkout team brought Kligerman down pit road for four fresh tires, fuel and a minor adjustment to combat a tight racecar. He restarted 23rd on lap 28.

● Kligerman reported on lap 42 that he was too tight on entry and needed some help on the next stop. Despite the balance issue, he worked his way up to 16th by the stage end.

● During the break, the No. 96 Fast Checkout team pitted for four tires, fuel and another adjustment to help loosen up the racecar.

● The No. 96 Fast Checkout Toyota Camry restarted 16th and stayed there during the opening laps. Kligerman fell back to 17th as the long run continued.

● Kligerman reported on lap 118 that the balance of his Toyota Camry was better but he still needed more security early in the runs. He worked his way back up to 16th.

● On lap 123, the No. 96 team called its driver to pit road for a scheduled green-flag stop for four tires, fuel and another adjustment. Kligerman rejoined the field 22nd.

● As the stage ended caution-free, Kligerman raced the No. 96 Fast Checkout Toyota Camry up to 17th, one lap down. During the stage break, the team pitted for four tires, fuel and an adjustment to combat a loose racecar.

● Kligerman stayed in the top-20 as the stage continued. On lap 216, a caution came out while the No. 96 Fast Checkout Toyota Camry ran 19th. The team took the opportunity to come down pit road for another four fresh tires, fuel and an adjustment. Kligerman restarted 20th on lap 222.

● The caution came out again one lap after the restart. Kligerman successfully avoided the incident on track, and he stayed out and restarted 19th.

● Kligerman continued to struggle with the balance on restarts. He finished 20th in his first NASCAR Cup Series start in two years.

● Kyle Larson won the Hollywood Casino 400 to score his 15th career NASCAR Cup Series victory, his ninth of the season, and his first at Kansas. His margin over second-place Chase Elliott was 3.619 seconds.

“Thanks to Gaunt Brothers Racing, Toyota and Fast Checkout for being awesome to work with today. It was definitely a day where we struggled on the short run and were really fast on the long one. It was just a matter of me learning and trying to figure stuff out in the second half of the race. We needed a Lucky Dog or something to go our way to get back on the lead lap. We could’ve easily finished in the top-15. I probably asked for one adjustment that made us go back a little bit. Overall, a successful top-20 day. I don’t think that’s a miss at all after hopping back in a Cup car after two years. It was one of the best Cup cars I’ve ever driven.”

The next event on the NASCAR Cup Series schedule is the Xfinity 500 on Sunday, Oct. 31, at the Martinsville (Va.) Raceway. It is the ninth race of the 10-race playoffs and the final race in the Round of 8. It starts at 2 p.m. EDT with live coverage provided by NBC and SiriusXM NASCAR Radio.