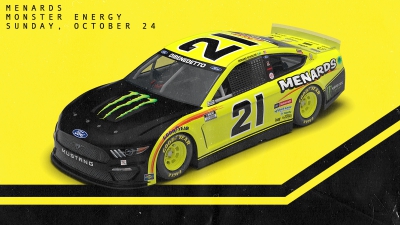 Matt DiBenedetto and the No. 21 Menards/Monster team return this weekend to the scene of their best finish so far in the 2021 Cup Series season.

It was at Kansas Speedway back in May that DiBenedetto scored a fourth-place finish. Now they’re back at Kansas for the 21st annual Hollywood Casino 400, which will be the final intermediate-track race of the season.

In May, DiBenedetto started fifth, struggled in the first two Stages but capitalized on some late-race restarts and drove into the top five despite having just two fresh tires whereas many of his competitors had four.

Not surprisingly, he’s looking forward to a return to the 1.5-mile track, where his Wood Brothers team has five top-five and nine top-10 finishes in 23 starts.

“Kansas is my favorite mile-and-a-half track since the racing is so good there,” DiBenedetto said. “You can run all over the race track.”

“We have good speed on the 550 tracks, so we just need to get that win especially with how well the team is working together,” he said.

DiBenedetto and the Menards/Monster team will have extra motivation this weekend as the No. 21 Mustang will carry the name of Cancer Hero Howard Scholick above the driver’s door in the position normally taken by DiBenedetto’s name.

Scholick, of Columbia, Md., was nominated by his son-in-law Scott Townsend as part of a program put on by the Martin Truex Jr. Foundation, the NASCAR Foundation and AdventHealth.

Townsend said he chose DiBenedetto and the Wood Brothers because they share some of the same qualities as his late father-in-law.

“They operate with honesty, integrity and never shy away from hard work,” Townsend wrote.

“Matt has not had an easy road to get to the top level of NASCAR, but even when constantly being faced with adversity he continues to work hard with his ‘never give up attitude.’”

He said Scholick was much like DiBenedetto when it comes to work ethic and determination.

“It’s just a perfect fit, and we as a family are so thankful for the opportunity to honor Howard in this way.”

Team co-owner Jon Wood said his family and DiBenedetto are proud to be a part of the Cancer Hero program.

“It’s an honor to be chosen by the Scholick family, and we will do our best this weekend to turn in a performance that a hero like Howard would be proud of,” Wood said.

DiBenedetto will start Sunday’s Hollywood Casino 400 from 15th place, as the line-up was set using metrics from Texas, with the eight remaining Playoff contenders occupying the first four rows.