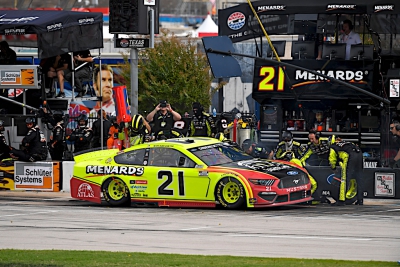 Matt DiBenedetto and the No. 21 Menards/Atlas/Mohawk team bounced back from a mid-race setback to race inside the top 10 before finishing 13th in Sunday’s Autotrader 500 at Texas Motor Speedway.

DiBenedetto started the final 500-mile race of the 2021 Cup Series season from 13th place and drove up to 11th before the Competition Caution flag flew at Lap 26.

Crew chief Jonathan Hassler elected to change just two tires under the yellow flag, and the time saved on pit road allowed DiBenedetto to restart the race from sixth place.

He quickly drove into the top five and ran as high as third place before dropping out of the top 10.

The Menards team pitted before the end of Stage One to make adjustments and service the No. 21 Mustang, and fell a lap off the pace. DiBenedetto took the wave-around at the end of the Stage and restarted the race from 16th place.

In Stage Two, a caution flag flew just after the team had made a green-flag pit stop, and that put the No. 21 Mustang two laps in arrears.

The team used the wave-around to regain one lap, and as the third Stage got underway, DiBenedetto found himself battling Austin Dillon for the Free Pass position.

He took that spot when Dillon headed to pit road for a green-flag stop.

This time, the caution flag was DiBenedetto’s friend, as a spin by Chase Briscoe allowed the Menards Mustang to rejoin the lead lap and line up 14th for a restart with 54 laps remaining.

During a flurry of late-race restarts, DiBenedetto worked his way as high as seventh place, before losing ground on the last two restarts and ending the race in 13th place.

“We came from two laps down back to seventh place and thought we were going to sneak off a good finish, but the top lane restarts hurt us at the end,” DiBenedetto said. “The Menards/Atlas/Mohawk team had to work hard today.

With their finish, DiBenedetto and the Wood Brothers team were able to regain 18th place in the points standings heading into this weekend’s Hollywood Casino 400 at Kansas Speedway.