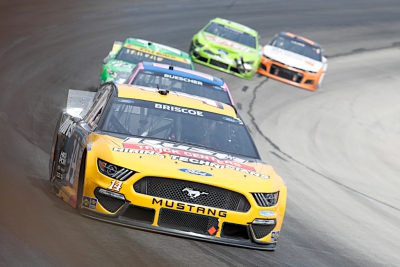 ● The Rush Truck Centers/Cummins Ford driver maintained his position during the 25-lap run to the competition caution despite a growing loose condition. He pitted for four tires, fuel and track-bar, wedge and air-pressure adjustments in an effort to tighten up the racecar. He restarted 26th when the race went back to green on lap 30.

● Briscoe was able to make his way around a 12-car incident ahead of him on the restart that brought out the caution flag and emerged in 18th place. He pitted to top off the fuel tank and restarted 20th on lap 39.

● The changes made helped the loose condition marginally, Briscoe told the crew as he was running 19th on lap 53. He said his Rush Truck Centers/Cummins Ford was still loose getting into turn one and also on entry.

● In fuel-saving mode for the latter part of the run to the stage break, Briscoe was able to make it last to the end of the stage in sixth place. He pitted for four tires and fuel and further adjustments during the break.

● The Rush Truck Center/Cummins Ford driver briefly moved into the top-five during the opening laps of the stage but again found himself fighting a loose condition that cost him his spot in the top-10.

● Briscoe reported on lap 137 while running 12th that the handling “was finally coming to me.” He was back in the top-10 when the caution flag flew on lap 165 for debris on the backstretch. “It felt way better there,” Briscoe said. “I feel like the track’s getting more grip.” He pitted for four tires, fuel and a track-bar adjustment and restarted 10th on lap 170.

● Handling continued to improve during the early part of the run to the end of the stage, enabling the Rush Truck Center/Cummins Ford driver to move forward. He reached eighth place before reporting he “lost the right front” during the closing laps of the stage. He pitted for four tires, fuel and an air-pressure adjustment during the break.

● The Rush Truck Centers/Cummins Ford driver had a solid start to the stage, advancing to ninth in the opening laps and then picking up a couple of more positions to seventh by lap 233, where he settled for the remainder of his fuel-and-tire run.

● On lap 273, while still running seventh, Briscoe reported smelling tire smoke after contact with the turn-one wall while racing Denny Hamlin. Moments later, his right-rear tire blew and he was able to get safely to pit lane while the caution flag flew for his debris. He took tires, then returned to the pits two laps later under caution to assess and repair the right-rear bodywork damage. He restarted 17th on lap 280, one lap down.

● The caution flag flew on lap 299 for fluid on the track with Briscoe still running 17th. He pitted for four tires and fuel and restarted 16th on lap 304. Shortly after the field took the green flag, the caution flag, and then the red flag, flew for a multicar incident in turns one and two. The race resumed after the 11-minute red-flag period, and Briscoe restarted 16th and in the Lucky Dog position when it went back to green on lap 309.

● Briscoe earned his way back to the lead lap when the next caution flag flew for a spinning car in the backstretch on lap 313. He asked for the Rush Truck Centers/Cummins Ford to be tightened up, “so I can be really aggressive here.” After pitting for four tires, fuel and some front-end inspection and repair, he restarted 15th on lap 317.

● Just three laps later, a car into the turn-four wall brought out the caution once again. Briscoe took advantage of the opportunity to come down pit road for further damage inspection and repairs and restarted 14th on lap 325.

● On lap 327, Briscoe was contacted from behind by the car of Chris Buescher in the backstretch, sending the Rush Truck Centers/Cummins Ford into the outside wall. Briscoe was able to drive it back to the pits for repairs under caution. He restarted 15th on lap 332 and held position during the two-lap run to the checkered flag.

● Briscoe earned his 11th top-15 of the season, and it came in his first NASCAR Cup Series start at Texas.

● Briscoe was the highest finishing NASCAR Cup Series rookie for the 28th time this season.

● Kyle Larson won the Autotrader EchoPark Automotive 500 to score his 14th career NASCAR Cup Series victory, his series-leading eighth of the season and his first at Texas. His margin over second-place William Byron was .459 of a second.

● Only 15 of the 39 drivers in the Autotrader EchoPark Automotive 500 finished on the lead lap.

“The finish didn’t show it, but the guys did a great job making our Rush Truck Centers/Cummins Ford better all day long. I really appreciate the effort, especially after last week. It got a little crazy at the end, there, which makes you wonder what might have been if we could’ve avoided at least some of that. But it is what it is.”