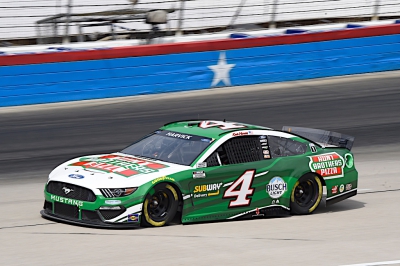 ●  The No. 4 Hunt Brothers Pizza Ford Mustang began the race with no rear grip getting into turns three and four. Harvick pitted from the 27th position during the competition caution (laps 27-30) and received tires, fuel and adjustments.

●  Harvick restarted just outside of the top-20 and was nearly collected in a multi-car accident on the backstretch. He made it by with no contact and lined up 16th for the lap-40 restart.

●  The team made a scheduled, green flag pit stop on lap 98 for fuel only and returned the track in 16th. With other cars saving fuel in the final laps of the stage, Harvick was able to drive up to 11th in the final seven laps.

●  Harvick pitted for fresh tires, fuel and a slight air pressure adjustment at the end of the stage.

●  Harvick wheeled the No. 4 Hunt Brothers Pizza Ford Mustang into the top-five on lap 115.

●  During a caution period on lap 167, Harvick pitted for four tires, fuel and a chassis adjustment to help his racecar turn better in turns one and two. He lined up sixth for the lap-171 restart.

●  Harvick quickly re-entered the top-five and held steady in fourth for the remainder of the stage.

●  Pitted for four tires, fuel and a chassis adjustment upon the conclusion of the stage.

●  Harvick made a move for the third position on lap 218 and he held that spot until lap 231 when he slipped back to fifth after reporting his Hunt Brothers Pizza Ford Mustang was loose in turns one and two.

●  Pitted on lap 277 while the race was under caution for four tires, fuel and more chassis adjustments.

●  Five caution periods in the final 34 laps allowed Harvick to gain track position and advance into the top-five for the final green-white-checkered restart.

●  After starting fifth on lap 333, Harvick ended the race in the same position.

●  Since joining SHR in 2014, Harvick has only two finishes outside the top-10 at Texas. During this time, he has scored 10 top-fives – three of which were wins while three others were second-place finishes.

●  Kyle Larson won the Autotrader EchoPark Automotive 500 to score his 14th career NASCAR Cup Series victory, his series-leading eighth of the season and his first at Texas. His margin over second-place William Byron was .459 of a second.

●  Only 15 of the 39 drivers in the Autotrader EchoPark Automotive 500 finished on the lead lap.

“We were really loose to start the race and the team made some good adjustments on the car. When they all crashed on the backstretch we were able to start around 16th and just work our way up from there. Overall, it was a good day. The team worked hard to put everything together and get us there at the end.”

The next event on the NASCAR Cup Series schedule is the Hollywood Casino 400 on Sunday, Oct. 24 at Kansas Speedway in Kansas City. It is the eighth race of the 10-race playoffs and the second race in the Round of 8. It starts at 3 p.m. EDT with live coverage provided by NBCSN and SiriusXM NASCAR Radio.