DiBenedetto Has Lofty Goals for Texas 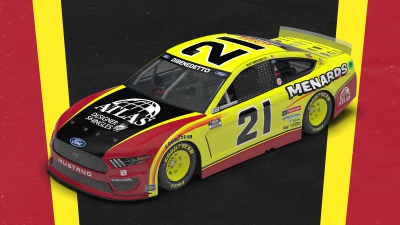 As the 2021 NASCAR Cup Series season enters the homestretch, with just four races left to run, Matt DiBenedetto and the No. 21 Menards/Atlas/Mohawk team continue to put fast Ford Mustangs on the race tracks and come away with good results more often than not.

DiBenedetto and the team, having posted nine top-12 finishes in the past 13 races, hope to keep that momentum rolling in Sunday’s Autotrader EchoPark Automotive 500 at Texas Motor Speedway.

The team heads to the 1.5-mile track in Ft. Worth coming off a sixth-place finish on the ROVAL at Charlotte Motor Speedway. That was his and the team’s ninth top-10 finish of the season, and they’re hoping to move into double digits this weekend at Texas, where they finished eighth last fall in their most recent appearance there.

DiBenedetto said his and the team, now 19th in the points standings, are more focused on the checkered flag than statistics and the standings as the season winds down.

“Our Menards Mustangs have been fast at Texas,” DiBenedetto said. “It’s crazy to think the season is almost over, but Texas is a track where we have had excellent speed in the past.

“Our only goal is to go for the win.”

There will be no practice or qualifying prior to the start of Sunday’s 501-miler. DiBenedetto will start 13th as the line-up was set based on metrics from the most recent race, at Charlotte, with the eight remaining Playoff contenders starting in front of all others.