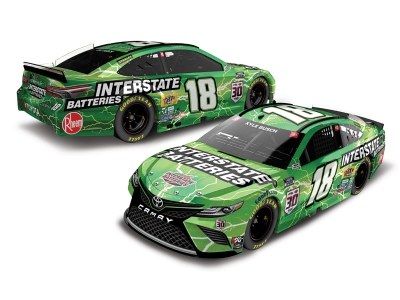 Interstate Batteries – the founding sponsor of Joe Gibbs Racing (JGR) – has been in a celebratory mood all season during the company’s impressive 30-year partnership with JGR. And nothing would be more perfect for the Dallas-based company than to cap off the 30-year celebration in victory lane after Sunday’s NASCAR Cup Series Autotrader EchoPark Automotive 500, just up the road from the company’s headquarters, at Texas Motor Speedway in Fort Worth.

Likewise, it’s no surprise that Kyle Busch, driver of the No. 18 Interstate Batteries Toyota for JGR, would like nothing more than to bring home his fifth Texas Cup Series win this weekend, not only for another chance to celebrate with his longtime partner, but to automatically lock himself into the Championship 4 Nov. 7 at Phoenix Raceway. Needless to say, there’s a lot on the line as Busch and his fellow Cup Series competitors head to the 1.5-mile Texas oval.

Sunday’s race at Texas serves as the first race of the Round of 8 of this year’s Cup Series playoffs. Busch advanced with his fourth-place run in the Round of 12 finale last Sunday on the Charlotte (N.C.) Motor Speedway Roval. The two-time Cup Series champion is the defending Texas race winner.

Busch brings plenty of optimism, along with 23 important playoff points, to the Round of 8. With the unknowns of Talladega (Ala.) Superspeedway and the Charlotte Roval now in the rearview mirror, Busch can focus on the next three tracks ahead of him in the Round of 8 – Texas, Kansas Speedway in Kansas City, and Martinsville (Va.) Speedway. Busch has a combined eight wins at those three tracks, including victories at both Texas and Kansas within the last calendar year.

With Interstate Batteries finishing off its six primary sponsorships of Busch’s No. 18 Toyota in 2021, JGR’s founding partner hopes to put an exclamation mark on an important milestone as the team celebrates its 30th anniversary of Interstate Batteries being along for the ride every step of the way. Busch has brought home nine victories sporting the colors of Interstate Batteries. Add Bobby Labonte’s 21 wins and Dale Jarrett’s two, and Interstate has made a combined 32 visits to victory lane in the Cup Series over the years. Labonte scored his last win for Interstate Batteries at the 2003 season finale at Homestead-Miami Speedway, and five years later it was Busch who brought Interstate back to victory lane during his first season at JGR, when he bested Carl Edwards to win the July 2008 race at Daytona (Fla.) International Speedway.

As fall is in full swing and winter is quickly approaching, Busch is encouraging race fans to stop by a local Interstate dealer to get their vehicle batteries checked, as cold weather of winter can adversely affect a car’s battery.

So as NASCAR’s top series heads to Texas for the start of the Round of 8 on Sunday, Busch and the Interstate Batteries team are charging toward back-to-back fall wins in the Lone Star State. As Busch sports the colors of the official battery and founding sponsor of JGR for the final time this season, he hopes there’s one more celebration for its 30th anniversary season, back in a familiar spot – Texas victory lane.