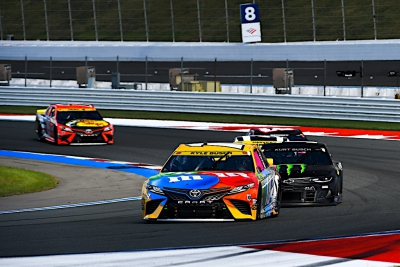 ● After Busch reported that his racecar lacked rear grip, the team elected to make a trip to pit road for chassis and air pressure adjustments and four fresh tires on lap nine. The competition caution waved one lap later with Busch in 19th place.

● Because the M&M’S team had stopped right before the caution, Busch lined up 11th for the restart on lap 13.

● The second caution was displayed for an accident on lap 19 with Busch in seventh place. A handful of teams, including the No. 18, elected to make a trip to pit road for service. It was another round of chassis and air pressure adjustments, four tires and fuel for Busch.

● Green-flag racing resumed on lap 22 with Busch in 13th place. He was able to race his way to seventh by the time Stage 1 concluded.

● Green-flag racing resumed, and Busch made a bid for the lead during the opening lap of Stage 2, taking over first place.

● Caution waved for a single-car accident on lap 33. The No. 18 team elected to stay out during the caution, maintaining the top spot.

● Green-flag racing resumed on lap 35 with Busch in the lead.

● The two-time NASCAR Cup Series champion quietly logged laps for the rest of the stage, cruising to lap 50 and scoring the stage win.

● During the caution the team made another round of chassis and air pressure adjustments, changed four tires and added fuel. Busch won the race off pit road, but because a number of teams had made green-flag pit stops prior to the conclusion of Stage 2, the No. 18 lined up 20th to start the final stage.

● A couple of cautions slowed the opening laps of the final stage. The Las Vegas native quietly logged laps and was up to 16th place when green-flag pit stops started taking place on lap 74.

● Busch was up to 13th place when caution was displayed for debris on lap 86. He reported that the No. 18 car still lacked grip at various points on the road course. Anticipating a series of cautions to end the race, the team elected to only change four tires and add fuel during the caution.

● Busch had raced his way to eighth place when caution waved for a single-car accident in turn one on lap 99.

● Green-flag racing resumed on lap 101, and Busch was able to make the most of the restart, moving from eighth up to fifth by the time the field came around to complete lap 102. He picked up one more position to finish the day in fourth place and advance to the Round of 8 in the 10-race playoffs.

“Overall, it was a good day for the M&M’S Camry. We came here with a plan, and we tried to execute it as best we could. I would say we were just OK. I wouldn’t call us stellar. We did lead that stage and get a point there, so that was good, but we’re moving on and have some tracks that have been good for us. We have won at both Texas and Kansas within the last year, so I feel like that’s a good omen for us. The mile-and-a-half programs have been really strong for us. We should have a pretty good starting spot next week, and we just have to keep ourselves up front. Just looking forward to next week.”