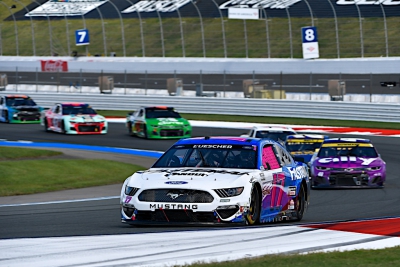 Chris Buescher put together an impressive afternoon at the ROVAL at Charlotte Motor Speedway, finishing third in the Fastenal Ford after spending much of the race inside the top-10 of the 400-mile event in a cutoff race for the NASCAR Playoffs.

“That was a fun time,” Buescher said of the finish. “I’m really appreciative of everybody on this Fastenal Ford Mustang group. We worked hard. We were able to stay on pace all day and had a gameplan and followed through and ultimately got us into the top five. I had a top three there, but it got a little rough there at the end and I made a mistake with probably five to go and unfortunately we didn’t have a shot to win because of that, but we were definitely in the hunt. That was a lot of fun, I enjoyed the day and I’m pretty thankful for everybody.”

Buescher began his march forward about midway through the afternoon, advancing into the top-10 late into stage two. He finished the opening 25-lap segment in 24th, but would quickly insert himself into the conversation with a bit of a strategy move from crew chief Scott Graves as stage two ended. He would finish it in 19th, but rolled seventh on the ensuing restart, and from there never left the top-10.

The Prosper, Texas, native jumped into fifth with 40 to go, and led a lap as a set of green-flag stops cycled through with under 35 to go. The first of three cautions over the final 22 laps flew for debris with Buescher in fourth, when he brought the car down pit road again as a host of cars stayed out in the sequence.

He restarted eighth with 20 to go, and was sixth by the next caution. Buescher lined up fourth for the final shootout to the finish, and finished it off in third for his first top-10 on the ROVAL, his second-straight top-10 overall and seventh of the season.

The No. 17 team is back in action next week at Texas Motor Speedway, where Sunday’s race is set for 2 p.m. ET on NBC. It can also be heard on PRN and SiriusXM Channel 90.