NCS: Kyle Larson punches ticket into Round of 8 with win at Charlotte Roval 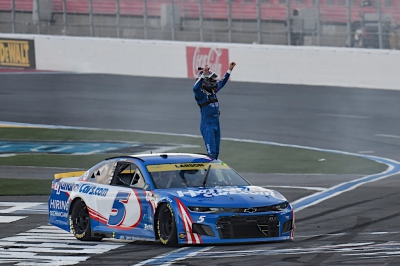 Kyle Larson won his seventh win of the 2021 NASCAR Cup Series season with his win on Sunday in the Round of 12 elimination race at Charlotte Motor Speedway.

Larson faced issues early in the race when his car suffered electrical issues that forced the team to change the battery and the alternator belt.

However, driver No. 5 quickly rebounded and climbed back into race contention. On the race’s final resort with 8 laps to go, Larson passed Denny Hamlin, who is already loved into the Round of 8 with his win at Las Vegas Motor Speedway for the lead and would go on to win.

Rounding out the top five were Tyler Reddick in second, Chris Buescher in third, Kyle Busch in fourth and Denny Hamlin in fifth.

In Larson’s post-race interview with NBC Sports, he admitted some electrical problems that he was aware of the would put him below the cutoff line to advance for a portion of the race.

“Obviously I had a pretty good idea. I’d gone through it here a few years ago in the 42,” Larson told NBC Sports post-race. When you think you’re good and all of a sudden you’re running like 40th. You’re like well… I’m down below the cutline.”

Kevin Harvick, Christopher Bell, William Byron and Alex Bowman all were eliminated from the playoffs after Sunday’s race.

Harvick’s day came to an end after his playoff feud with 2020 Cup Series champion Chase Elliott started again during the final stage of the race.

On lap 55, contact from Harvick would send Chase Elliott into the Turn 7 wall. In Turn 8, Elliott lost control of the car and clipped Cole Custer. After the wreck, communication over Elliott’s team radio centered payback on Kevin Harvick.

Elliott wouldn’t have to return the favors.

With 11 laps remaining, as Harvick was closing in on Elliott, Harvick locked up his brakes in Turn 1 and slid into the safer barrier.

After the race, Elliott chimed in on the situation.

“Our team has a lot of fight and I’m super proud of that,” Elliott told NBC Sports. As far as Kevin goes, I just want to wish them a merry offseason and a happy Christmas.”

Rounding out the top ten were Matt DiBenedetto in sixth, Joey Logano in seventh, Christopher Bell in eighth, Ryan Blaney in ninth and Alex Bowman in tenth.

The NASCAR Cup Series will head to Texas Motor Speedway next Sunday in the Round of 8 opener at 2:00 p.m. Eastern on NBC.