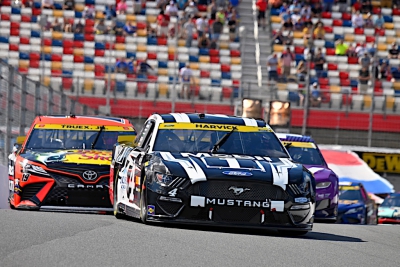 ●  Made scheduled, green flag pit stop for four tires only on lap nine. Had been running ninth prior to pitting.

●  “Wheel-hopped there in chicane,” said Harvick during the caution. “Having to kind of ‘baby’ it through there.”

●  Harvick stayed out during the competition caution while others pitted. Lined up ninth for lap-14 restart.

●  “When we fill it with fuel, we’re going to have to tighten the back up some,” said Harvick during a caution on lap 19 while running 10th.

●  Took advantage of the caution and pitted for four tires and fuel with a track bar adjustment on lap 21.

●  Picked up five spots in the final laps of the stage to finish 10th.

●  Harvick stayed out during the resulting caution period to gain track position.

●  Harvick kept the No. 4 Mobil 1 Ford Mustang steady in fifth after battling with AJ Allmendinger and Kyle Larson on the opening green flag lap.

●  Picked up fourth place from Allmendinger on lap 33 shortly before the caution flag waved.

●  Harvick stayed out during the caution and lined up third for lap-36 restart. He took second place from William Byron as the field barreled into turn one.

●  Chase Elliott passed Harvick on the final lap of the stage, leaving Harvick third when the stage ended.

●  “Totally lost the back of the car on entry and exit,” said Harvick at the conclusion of the stage.

●  Pitted for four tires and fuel at the end of the stage. Made a track bar adjustment and tire pressure adjustments.

●  On lap 56, Harvick made contact with Elliott coming off turn seven to bring out the caution.

●  Harvick made scheduled, green flag stop on lap 76 for four tires and fuel with chassis adjustments.

●  After pit stops cycled through, Harvick was 12th with 30 laps to go.

●  Passed Alex Bowman for ninth on lap 85 as the duo raced through the frontstretch chicane (turns 15-16).

●  “I can’t get the grip that I need off the back chicane and front chicane. Need more forward drive,” said Harvick while running ninth during a caution period on lap 87.

●  Pitted for four tires and fuel with chassis adjustments while under caution on lap 88. A handful of other drivers opted to stay out.

●  Lined up 12th for lap-90 restart and stayed in that spot as the caution came out again on lap 93.

●  Returned to green on lap 96, but three laps later, Harvick’s race was over after heavy contact with the turn one wall.

●  Harvick was subsequently evaluated and released from the infield care center before the race ended.

●  Harvick did not advance beyond the Round of 12 for the first time since the inception of the elimination-style NASCAR Playoff format in 2014. He was vying for his eighth appearance in the Round of 8.

●  The Bank of America Roval 400 marked Harvick’s milestone 750th career NASCAR Cup Series start. He is one of just 13 drivers in series history to make 750 or more starts.

●  Kyle Larson won the Bank of America Roval 400 to score his 13th career NASCAR Cup Series victory, his series-leading seventh of the season and his first on the Roval. His margin over second-place Tyler Reddick was .782 of a second.

●  There were nine caution periods for a total of 18 laps.

●  Thirty-one of the 39 drivers in the Bank of America Roval 400 finished on the lead lap.

Kevin Harvick, driver of the No. 4 Mobil 1 Ford Mustang for Stewart-Haas Racing:

Playoff Standings (to begin Round of 8):

Failed to Advance to Round of 8:

The next event on the NASCAR Cup Series schedule is the Autotrader EchoPark Automotive 500 on Sunday, Oct. 17 at Texas Motor Speedway in Fort Worth. It is the seventh race of the 10-race playoffs and the first race in the Round of 8. It starts at 2 p.m. EDT with live coverage provided by NBC and SiriusXM NASCAR Radio.