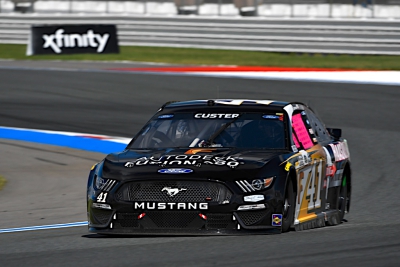 ● The No. 41 Autodesk Fusion 360/HaasTooling.com Ford driver reported early in the run that he needed more rear grip in his Ford Mustang.

● Crew chief Mike Shiplett made the call to bring his 23-year-old driver down pit road for four tires, fuel and a track-bar adjustment to combat his loose-handling racecar.

● When the competition caution came out on lap 10, Custer was able to stay out while the leaders came down pit road. He restarted 21st when the race went back green on lap 13.

● Custer continued to report that he needed more rear grip and drive off in his Ford Mustang. The team pitted under caution on lap 20 for another four tires, fuel and a track bar adjustment. Custer restarted 21st on lap 22.

● The No. 41 Autodesk Fusion 360/HaasTooling.com Ford driver worked his way up to finish 19th in the stage. During the break, Custer reported that the adjustments made by the team so far were great, but they still needed to work on his Ford Mustang throughout the race. The No. 41 Autodesk Fusion 360/HaasTooling.com team opted to stay out and restart 12th.

● The Ladera Ranch, California, native jumped into the top-10 on the lap-29 restart and ran there until the caution came out on lap 33. During the yellow flag, Custer reported that the rear grip had gotten better but he still needed a little more help. The team kept him out, as the caution didn’t fall in their pit window, and he restarted seventh.

● Custer continued to run in the top-15 until contact with the No. 10 Ford Mustang of Aric Almirola on lap 44 caused Custer to spin going into turn one. With minimum damage, the No. 41 Autodesk Fusion 360/HaasTooling.com Ford Mustang got back up to speed and pitted on lap 46 for four fresh tires, fuel, an air-pressure adjustment and another track-bar adjustment.

● Custer reported that he needed more drive off and that long runs were a weak point. He finished Stage 2 in 31st and stayed out during the stage break to restart 16th.

● The No. 41 Autodesk Fusion 360/HaasTooling.com Ford driver was running 17th when contact with the No. 9 car of Chase Elliott sent his Ford Mustang for a spin on lap 56, causing him to fall back to 32nd. He pitted under caution on lap 57 to fix the damage, put on a set of four fresh tires and fill up on fuel. Custer rejoined the field 31st, but on the lead lap.

● After working his way up to 26th, Custer reported that he thought he had a tire rub when going through the infield portion of the road course. The team assured him that he was fine and to keep going.

● Custer reported on lap 70 that his No. 41 Autodesk Fusion 360/HaasTooling.com Ford Mustang had no front turn and needed more rear drive on the long runs.

● He had worked his way up to 22nd before green-flag pit stops began on lap 75. He pitted from 14th a lap later for four tires, fuel and an air pressure adjustment to combat a loose racecar.

● Custer worked his way up to 23rd before the caution came back out on lap 86. He reported that the car was the best it had been all day. The No. 41 team brought its driver down pit road for another four tires, fuel and a slight adjustment.

● Custer worked his way up to 18th in the laps that followed. He ran there until the final caution on lap 99.

● When the race restarted on lap 101, Custer was 15th. While struggling with a tight racecar on the short runs, he fell back to 18th, where he finished the race to earn his 14th top-20 of the 2021 season.

● Kyle Larson won the Bank of America Roval 400 to score his 13th career NASCAR Cup Series victory, his seventh of the season and his first on the Roval. His margin over second-place Tyler Reddick was .782 of a second.

● There were nine caution periods for a total of 18 laps.

● Thirty-one of the 39 drivers in the Bank of America Roval 400 finished on the lead lap.

Cole Custer, driver of the No. 41 Autodesk Fusion 360/HaasTooling.comFord Mustang for Stewart-Haas Racing:

“That was a rough one for us. We got caught up in two incidents on the track, but I’m proud of the No. 41 Autodesk Fusion 360/HaasTooling.com team for never giving up and continuing to work to get our car better. The lap times we were putting down were fast, but we were just stuck in the back of the pack, where it’s harder to pass. We’ll take what we learned and head to Texas.”