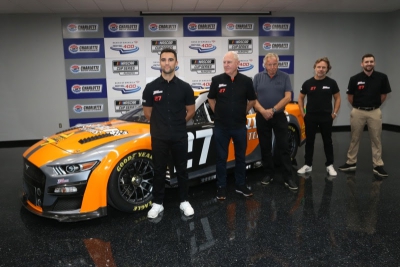 For the first time ever, a team coming from the NASCAR Whelen Euro Series and from the Netherlands will enter the NASCAR Cup Series in the United States. Team Hezeberg, the joint effort between racing legend Toine Hezemans and Dutch entrepreneur Ernst Berg will field the #27 Hezeberg Ford Mustang in the 2022 NASCAR Cup Series with the technical support of Mooresville-based Reaume Brothers Racing. The plan is for 2019 NWES champion Loris Hezemans to drive a partial schedule including all the road courses on the calendar and potentially more ovals when approved by NASCAR.

The owners of Team Hezeberg, Ernst Berg and Toine Hezemans, are old friends who raced together in the Seventies and even sponsored a Formula 1 car in the 80’s. Hezemans won three European championships and all major endurance races between 1970 and 1978, including the 24 Hours of Daytona, the legendary Targa Florio, and a class win in the  24 Hours of Le Mans. In the NASCAR Whelen Euro Series, Hezemans is the mastermind behind the Hendriks Motorsport campaign and since debuting in 2018, the team won back-to-back Teams Championships in 2019 and 2020 with the #50, the EuroNASCAR PRO drivers title in 2019 and the EuroNASCAR 2 drivers title in 2020.

Since its inception of the series in 2009 and its official entrance among the NASCAR sanctioned series in 2012, the NASCAR Whelen Euro Series provided the best opportunities for European drivers to develop a NASCAR career and to compete in the United States. Over 25 NWES drivers already crossed the Atlantic to race at every level of NASCAR competition, from the NASCAR Weekly Series to the NASCAR Cup Series. It will be the first time that a EuroNASCAR team will take on the best American organizations, proving NWES as the perfect gateway towards the highest level of NASCAR racing.

“The introduction of the Next Gen car by NASCAR is at the core of our decision to build a team and join the NASCAR Cup Series,” explained Toine Hezemans. “This new concept is the perfect challenge for us and the model NASCAR built around the Next Gen car makes the American market even more interesting, generating opportunities for a team to prosper.”

Ernst Berg’s racing career revolved more around the Dutch Touring Cars championship and was highlighted by a season in the World Sportscar Championship and in the 24 Hour of Le Mans.

“With Toine we have a long friendship that stemmed from our experience in racing,” declared Berg. “During my further entrepreneurial life there has been involvement in the commercial side of Formula 1, which gave me familiarity with the sport. Toine’s friendship over the years and his phenomenal input in the sport inspired me to pick up on an automotive collaboration we had in the past and NASCAR with the Next Gen inspired us even more to take the challenge of being involved. Now let’s see what we can make of it, we believe we can revive the tremendous fun we had in the past.”

The idea of fielding a two-car team in the Cup Series with the Next Gen car sparked in 2019 and the first Mustang to come out of the shop will hit the track in the October 11-12 test at the Charlotte Roval, driven by 2019 NWES champion Loris Hezemans and former Formula 1 and Indy 500 champion Jacques Villeneuve. In 2022, Team Hezeberg will field the #27 Mustang for Hezemans in a partial schedule including all road course races while the Dutchman completes NASCAR’s approval process to be able to compete on all ovals by 2023.

Competing in the ​​NASCAR Whelen Euro Series since 2019, Jacques Villeneuve gets to the Charlotte Roval test fresh off his fifth career podium in 21 starts in the European NASCAR championship. Both Hezemans and Villeneuve will return to NWES competition at the 2021 Finals in Vallelunga, Italy on October 30-31.

‘’I am out of words to describe the excitement of the future that awaits for us with Team Hezeberg, it started off with an idea in 2019 when we first heard about the Next Gen car and now we are nearing our first ever Cup test seems simply surreal,” said Hezemans. “I am thankful to NASCAR for giving me the opportunity to participate in this test at the Charlotte Roval and gain experience as well as bring feedback to the team. Furthermore I will be looking to continue working on my approvals for the future.’’

Loris Hezemans made his debut in the NASCAR Whelen Euro Series in 2018, after showing his talent on the International scene in WTCR, Blancpain GT Series and ADAC GT Masters. He immediately left his mark by winning the NWES Junior Trophy classification for drivers aged 25 and under. The following year, Hezemans won the European NASCAR title at the age of 22 – the youngest EuroNASCAR champion ever – and made his NASCAR Xfinity Series debut at Road America.

Despite the pandemic putting a big obstacle on his path, Hezemans resumed his learning experience in the US in 2021 with more starts in the NASCAR Xfinity Series in order to reach NASCAR’s approval to race in Cup on ovals, all while chasing his second NWES title. Hezemans currently leads the European points standings ahead of the October 30-31 Finals and boasts 11 NWES wins in his young career.

With more testing scheduled ahead of the 2022 season, Team Hezeberg is currently entertaining talks for the second Mustang’s seat.