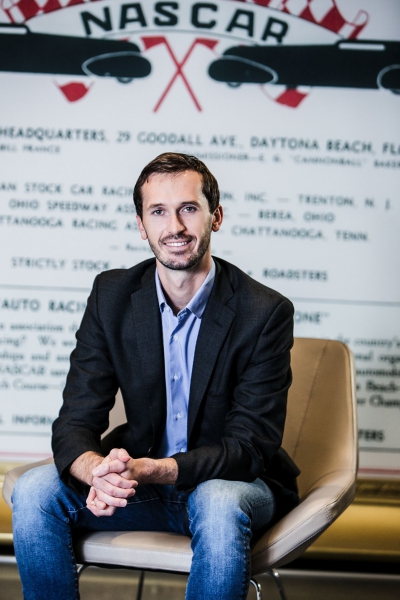 As NASCAR has announced bold new editions of the 2022 race schedules for its three premier series in the last few weeks, a fresh voice in leadership has essentially taken the corporate green flag - 29-year old Ben Kennedy. The great-grandson of NASCAR founder Bill France Sr. has been the “point man" on the schedule work, essentially the new look of the sport.

As with his mom, NASCAR executive Lesa France Kennedy, his uncle Brian, the sanctioning body’s former Chairman & Chief Executive Officer, his great-uncle Jim, current Chairman & CEO of NASCAR and his grandfather, the late Bill France Jr., Ben Kennedy has spent much of his life learning the ways of NASCAR and keeping it modern and relevant with the passing time.

His current position as Senior Vice President of Strategy and Innovation is a long way from the summers Kennedy spent as a teenager working humble jobs at Daytona International Speedway - as did his mom, uncles and granddad – collecting tickets, directing parking, and in Kennedy’s case, pulling shifts at the popular DAYTONA 500 Racing Experience – the attraction once called Daytona USA - just outside the Speedway entrance.

Not too long ago, Kennedy found his old nametag, still in his former locker at Daytona USA. It said simply, 'Ben.'

There was no hint of his family’s connection to the facility or of the future leadership position 'Ben' now holds shepherding the sport into the next decade.

“It’s neat to go back and see some of those things sometimes,” Kennedy said. “Obviously, growing up in Daytona and going to a bunch of the Daytona 500s and traveling to a lot to different tracks, it gave you so much respect for all the different individuals that work at each one of these tracks and within the industry.

“And then to be able to do the different odd jobs in high school during the summer and then come out there and work at the Daytona 500 Experience for a couple years, it was such a cool experience and I got to meet so many amazing individuals."

That genuineness coupled with a high-wattage vision and a lot of natural ambition has already earned Kennedy - who graduated from the University of Florida with a degree in Sports Management - much respect throughout the industry - from the executives he works alongside to the drivers and team owners who will ultimately rely on Kennedy’s judgement and care to keep propelling the sport forward.

For many, such as longtime championship team owner Richard Childress, seeing Kennedy now in a position of oversight, has been inevitable.

“I think Ben’s the future of NASCAR," Childress said. “I see him as a young Bill Junior. Bill Junior changed the sport and the same will happen with Ben Kennedy.

“I remember when Ben was born," Childress continued with a huge smile. “I said, “Bill, what are you going to have Ben call you? He said, ‘Mr. France.’

The drivers, many of whom are of similar age to Kennedy, are quick to speak about the importance of having this new generation represented in NASCAR leadership. Not only is Kennedy willing to look at the sport through a different generational lens, but he has demonstrated the ability to try new things, such as adding new venues to the schedule or moving the Busch Clash race to the Los Angeles Memorial Coliseum next February for the first time in history.

“I feel like Ben’s been around enough and seen enough and obviously has great mentors he’s worked with, who have been around," said 31-year old Team Penske driver Joey Logano, the 2018 NASCAR Cup Series champion.

“He’s been around great people his whole life and been around the sport even more than me. I think it’s key to have someone like that in that position. I think you’ve seen that with the new schedule – that’s been a big piece on his plate, shuffling it up and trying new things.

“Going to the LA Coliseum, if you had told me that three years ago, I’d have said, ‘yeah okay, not a chance.’ But we’ve all learned this year that change is good for the sport. Look at all the new tracks we went to and what has happened. How many new people have come to these races? And going to new markets? You’ve got to switch it up and change it a little bit. So, I think he’s been around enough to have balance to know the historical race fan and also keep things appealing to the new race fan or non-race fan, yet.”

Drivers say that Kennedy stepping out of his NASCAR driver’s suit and into a three-piece suit is also an encouraging aspect of Kennedy’s background and make-up. He brings a different set of experiences to his new role off-track and into the boardroom.

In fact, not only did Kennedy compete fulltime in the NASCAR Camping World Truck Series for three years 2014-16, he won a race at Bristol (Tenn.) Motor Speedway and earned a spot in the series Playoffs in 2016.

In all, Kennedy had 10 top-five and 25 top-10 finishes in 73 NASCAR Camping World Truck Series starts. He also made 17 NASCAR Xfinity Series starts and in 2017, earning a top-five finish (fourth-place) at Talladega (Ala.) Superspeedway, where NASCAR races this weekend.

And it is this kind of “in the trenches” background that Kennedy feels has already benefitted him.

“I feel like some of that experience as a team owner and driver side has helped me at least get a different perspective on what it’s like on a day-to-day basis to kind of live in these roles," said Kennedy, who also owned ARCA Menards Series and NASCAR late model teams.

“It’s one of the interesting parts of our business. We’re so complex and there are so many different parts of the company and the industry, whether you’re a team owner or a driver or on the NASCAR side or an official, a broadcast partner, an official partner. We all come to the track with a completely different experiences but at the end of the day, we all come together to put on a great race for our fans. I think that’s one of the really cool things about our sport. We all live completely different lives and completely different experiences, but we all have one goal at the end of the day and that’s to go racing- and for the team and drivers, to go out there and win.”

Certainly, the drivers appreciate that kind of mindset from leadership. One after another of the NASCAR Cup Series top drivers spoke about their respect for Kennedy who – unlike the previous generation of more business-oriented leaders - came up the competition ranks. It adds a different perspective.

“I think the cool thing, the biggest thing I respect about Ben in his time, and I think is something that sometimes gets overlooked, is that he spent time racing, going to these short track races across the country racing late models, racing other cars," said 25-year old reigning NASCAR Cup Series champion Chase Elliott.

“He got into the Truck Series and raced a couple Xfinity races as well. I don’t know of any other, if there are, there are very few members of the leadership that have driven. So, I really appreciate that.

“I feel like he put in a lot of time and a lot of effort to try and make a driving career. I think you learn a lot of things that you would not typically see just by being on the leadership side. Being down there and being in the fight every week, kind of seeing things from a different angle, I think is going to make him a great leader."

Working alongside proven executives such as his uncle Jim France, NASCAR President Steve Phelps and NASCAR Executive Vice President, Chief Racing Development Officer Steve O’Donnell has had a beneficial impact all the way around.

Kennedy’s “why-not-try” sort of philosophy working in conjunction with veteran leadership has been a welcome contribution from those he works with and those he’s working for.

“I think Ben is more connected with his generation and I think that benefits us," Phelps said. “But, for example, I think it’s less about his age as it relates to the LA Coliseum, for example, and more about his willingness to embrace change that is the most important thing.

“I actually think, it really is more how you process and think about our business. It’s not change for change-sake, but smart change - that kind of calculated risk, where the upside is significant and the downside is negated in whatever means we take.

“He has embraced the change mantra, whether you’re talking about next-gen schedule or Next Gen car, obviously Ben will be a next-gen leader of this sport.

As Phelps said, Kennedy’s exuberance and openness has been embraced. But Kennedy’s is also mindful of steering things in a thoughtful, calculated direction. He does a lot of listening.

“I think I naturally lean toward the innovative mindset and to think differently, but I think surrounding myself with a lot of peers that have a lot of experience and know the reasons for why we got to where we are today, no matter what part of business," Kennedy said.

“It’s an interesting and neat balancing act to really try to keep our core and our tradition and the values of our sport but also to think differently about where we want to go in the future as a sport too, whether that’s the racing product we bring our fans, whether it’s the locations we’re going to, what that experience is like, even how fans are consuming content on a race weekend too.

“I think everyone wants to see something a little different. We’re never going to be able to cater to everyone, but I think we can meet somewhere in the middle and still have some innovative ideas and test some new things out along the way but still keep that tradition intact and make it special. It’s been a challenge for sure, but a neat challenge trying to thread a needle between the two of those.”

It’s exactly that kind of mindset that settles the hearts and minds of those he’s working with and working for.

“It goes past the legacy of the family and goes to a love of the sport," Phelps said. “I think he shares that, frankly, with Jim [France] because Jim has never seen a race he didn’t like. He can find something good in every race. And he loves it. There’s no place he’d rather be than a race track and I think Ben shares that same love of the sport and I think that’s really, really important for us as a company and more broadly, as a sport.”

It all leads to a lot of enthusiasm about the future of NASCAR – both immediate and grand-scale. And the palpable uptick comes from inside the garage, outside in the grandstands and from seats of corporate boardrooms.

Kennedy’s high hopes and expectations have been a source of exhilaration and point of promise for the sport. And perhaps the best news for those that believe in his potential is that he’s only getting started.

“He’s making bold moves that need to be made. And I think it’s been a major part of the success story the sport has seen over the last 12-18 months.

“I think we’re on an upswing."