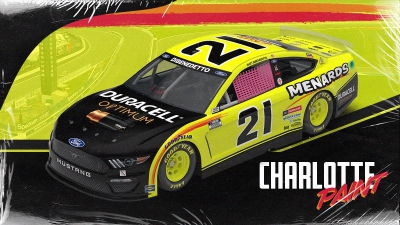 Matt DiBenedetto and the No. 21 Menards/Duracell team enter this weekend’s Bank of America ROVAL at Charlotte Motor Speedway on a road-course roll.

Sunday’s 253-mile race on the 2.28-mile, 17-turn track is the seventh and final road-course race of the 2021 Cup Series season. In the previous six, DiBenedetto and the No. 21 team got off to a slow start but have come on strong in the last three.

That surge began with a 10th-place finish at Road America, which was followed by an 11th at Watkins Glen then a fifth on the road course at Indianapolis Motor Speedway.

DiBenedetto said the turn-around over the course of the season have him optimistic heading into Charlotte, where races on the unique ROVAL, which is part road course and part oval track, have been unpredictable affairs.

“We have made big improvements at the road courses, but the ROVAL is its own animal that provides good excitement,” he said. “There’s no room for error there, and you’ve got to keep the car clean.”

He said he’s also encouraged by the team’s overall improvement since that 10th-place finish at Road America back in July. That run was the first of five top-10 and eight top-12 finishes in the past 12 races.

“Our Menards/Duracell team has been really good everywhere the last few months, so if we keep it up we can have a shot to win before the season is over,” he said.

There will be no practice or qualifying prior to the start of Sunday’s race, which will consist of 109 laps, with Stage breaks at Laps 25 and 50.

DiBenedetto will start 30th, the line-up having been set based on results from Talladega.

The green flag is set to fly just after 2 p.m. Eastern Time with TV coverage on NBC.