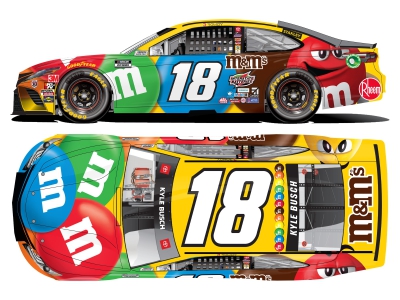 Since then, each and every March during the NCAA tournament, the phrase continues to be used by coaches and television analysts alike in describing the necessity of surviving each game in order to live on to play another day, ultimately accruing six consecutive wins to earn the grand prize – the national championship trophy.

Kyle Busch, driver of the No. 18 M&M’S Toyota for Joe Gibbs Racing (JGR), will no doubt take on this famous phrase as the NASCAR Cup Series heads to the final race of the Round of 12 in this year’s Cup Series playoffs – Sunday’s Bank of America Roval 400 at Charlotte (N.C.) Motor Speedway.

There are multiple paths to advance into the Round of 8 that begins the following weekend at Texas Motor Speedway in Fort Worth. As Busch sits eighth in the standings, nine points ahead of the cutline, he knows that a solid day will move him through to the next round. But, as the tricky 2.28-mile, 17-turn Roval has shown in its first three seasons, the results there can be as unpredictable as at Talladega (Ala.) Superspeedway, where the Cup Series raced last weekend. Busch was involved in an accident in Monday’s rain delayed race on the 2.66-mile Talladega oval but was able to leave Talladega with a cushion to the cutoff line, which is much different than his points situation one year ago.

It will be the fourth race for the Cup Series competitors on the Roval, which combines parts of the 1.5-mile Charlotte oval with its relatively new infield road-course section. The slippery infield portions feature heavy breaking zones that can turn a driver’s fortunes quickly and, again, make racing there just as unpredictable as Talladega.

Busch is hoping he can equal the feat he accomplished in the May 2018 Coca-Cola 600 at Charlotte, albeit on the oval, when he brought home his first career points-paying win at the track in one of the crown jewels of NASCAR’s top series.

While this weekend’s Charlotte Roval is still a bit of a unknown, Busch has established himself as one of the top road-course racers in the Cup Series. If the two-time Cup Series champion was to grab another checkered flag in Sunday’s Bank of America Roval 400, he could join some elite company as a road-racing ace in NASCAR’s top series.

As far as overall road-course proficiency, Busch is tied with David Pearson and Mark Martin with four Cup Series road-course wins apiece. That’s some pretty good company, already. But with a fifth road-course win, he could tie Darrell Waltrip, Tim Richmond and Dan Gurney on the road-course win list. The top three in all-time road-course wins in the Cup Series are Chase Elliott and Jeff Gordon with seven apiece, and all-time leader Tony Stewart, who has nine wins. In the six road-course races contested so far this year, Busch has three top-fives and four top-10s, including top-five finishes at Sonoma (Calif.) Raceway, Road America in Elkhart Lake, Wisconsin, and Watkins Glen (N.Y.) International.

So as Busch heads to the Charlotte Roval this weekend, he will hope to survive and advance to the Round of 8, which will take Busch to three tracks where he has excelled during his career. But he knows he has to be in it to win it in order to have a shot for his third Cup Series title.