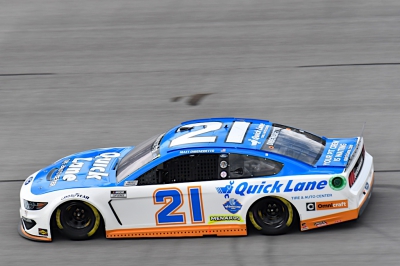 Matt DiBenedetto and the Quick Lane Tire & Auto Center team had a plan to run hard early on, verify their speed then save their No. 21 Mustang for a late-race bid for the win in Monday’s rain-delayed YellaWood 500 at Talladega Superspeedway.

Mother Nature had other ideas. Not only did rain cause the race to be postponed a day and shortened by 71 laps, the showers also foiled the plans of the No. 21 team.

After starting 15th, DiBenedetto sped to the front, led Laps 12-13, then dropped back in an effort to avoid the multi-car crashes that seem inevitable at Talladega.

While riding at the back, as planned, near the end of Stage Two, dark clouds began to build around the race track, so DiBenedetto and the team were forced to abandon their original strategy and try to quickly work their way forward.

But that didn’t work out either as he was collected in the race’s final crash and was credited with a 35th-place finish.

“We went up there early and led some and were feeling our car out,” DiBenedetto said as he exited the track’s infield care center after being checked out following his wreck. “We had good speed as always.

“The Quick Lane and Wood Brothers team always bring really fast race cars here, and we really wanted to feel it out.

“We got shuffled a little and were just riding. We were committed to that before the day started – to leverage the situation to our advantage.

“We don’t need Stage points, so we were going to cruise and let the wrecks happen and then in Stage Three go and try to run up front and go for the win.

“But Mother Nature threw a little kink in our plans, and obviously we see what happened….Weather became a factor, and we didn’t have the right track position at that point.”

He said that while he was disappointed today, he’s not discouraged about the remainder of the season.

“We’ve got some good races left,” he said. “We’ve been on a roll. Our team has been doing awesome, so we’re going to take that momentum and try and snag a win.”

Eddie Wood said he was disappointed that DiBenedetto and the Quick Lane team were swept up in a crash.

“I know how hard Matt and the Quick Lane team have worked on the superspeedway program,” he said. “They’ve been fast enough to win the last two races here at Talladega, so I know this one stings.”

“It’s really hard to win one of these races, so they have a lot to be proud of,” he said.

DiBenedetto and the Wood Brothers team remain 18th in the Cup Series standings and will be back on the track this weekend on the ROVAL at Charlotte Motor Speedway.