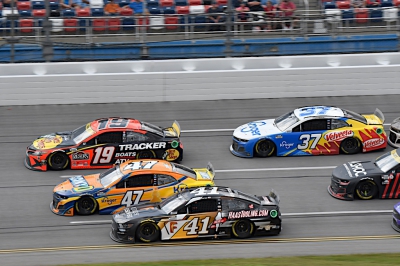 ● The No. 41 Autodesk Fusion 360/HaasTooling.com Ford driver made gradual forward progress from the start, cracking the top-20 by lap five, the top-10 by lap nine, the top-five by lap 16 and moving into the lead by lap 20. He led the final six tours of the 2.66-mile oval on his way to the lap-25 competition caution. Custer said his racecar “fired off a little free on entry, then got a little tight there at the end as rubber built up on the track.” He pitted for fuel and right-side tires and restarted second behind SHR teammate Kevin Harvick when the race went back to green on lap 29.

● Custer was running 17th when the first incident-related caution flag flew for a four-car accident on the frontstretch on lap 56. His racecar incurred rear-end contact, but the damage was not deemed significant enough to warrant an immediate trip to pit lane.

● Custer was scored 19th when the stage ended under caution on lap 60. He pitted for four tires, fuel and a thorough inspection of the rear-end damage, which required fairly minimal repair work before he continued.

● The 23-year-old driver was up to 19th when the caution flag flew for debris on lap 67. He reported his Autodesk Fusion 360/HaasTooling.com Mustang was feeling good, in general, but that the rear end felt a bit like it was floating over the track. He pitted during the caution on lap 67 for fuel and a right-rear track-bar adjustment, then pitted again on lap 70 to top off the fuel tank.

● Still under caution, rain wet the racetrack in turns one and two, and the red flag was displayed for 18 minutes, 20 seconds after the field was parked on pit road on lap 73. Once the race resumed under caution, Custer came down pit road for another splash of fuel on lap 75 before restarting 24th on lap 77.

● Within seven laps, Custer worked his way into the top-five alongside teammate Harvick and remained in the top-10 for the next 13 laps, until a nine-car accident on the backstretch brought out the caution flag on lap 97. Custer cleared the incident and was scored in ninth place, saying his Autodesk Fusion 360/HaasTooling.com Ford was “just too loose there.” He stayed on track and restarted ninth on lap 103.

● Another multicar accident brought out the caution flag on lap 115. Custer cleared the incident and was scored in 13th place. Two caution laps later, another rain shower brought the field onto pit road under the red flag, and the race never resumed due to persistent rain.

●  Custer earned his seventh top-15 of the season and his second top-15 in four career starts at Talladega.

●  Custer led once times for seven laps – his first laps led at Talladega.

●  There were five caution periods for a total of 27 laps.

●  Thirty-one of the 40 drivers in the YellaWood 500 finished on the lead lap.

“We had a fast Autodesk Fusion 360/HaasTooling.com Mustang today. We were able to drive to the front, even after we took a pretty decent hit from behind during that first wreck. The guys did a great job making sure everything was buttoned up, and I think we could have ended up with a really good finish if the race went the distance. Congrats to Bubba (Wallace) on getting his first win.”