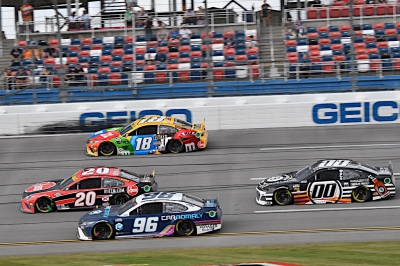 ● The No. 96 Carnomaly Toyota driver reported early in the run that his Camry was loose in the turns but would tighten up on longer runs.

● During the lap-25 competition caution, Cassill made a visit to pit road for a quick, fuel-only stop so the team could make it to the end of the stage. He restarted 18th on lap 29.

● Noticing the front of the field was racing hard, the No. 96 Carnomaly Toyota driver opted to fall to the back of the field to try and avoid any potential accident.

● Cassill was running 26th when a multicar accident happened midpack on lap 56. He successfully avoided the incident and came away with a clean No. 96 Carnomaly Toyota Camry.

● The stage ended under caution with Cassill running 24th. During the stage break, the team pitted for four tires, fuel and a slight air pressure adjustment to combat a loose condition.

● The No. 96 driver restarted the stage 21st and ran as high as 19th before the caution came out on lap 67 for debris. During the caution laps, the No. 96 Carnomaly team brought Cassill down pit road to fill up on fuel to try and make it to the end of the stage.

● The red flag came out on lap 71 for rain in the area. Cassill was running 26th.

● After an 18-minute red flag, the drivers refired their engines at Talladega. The No. 96 Carnomaly driver visited pit road one more time to fill up on fuel to try and make it to the end of the stage. He restarted 26th when the race went back green on lap 77.

● Cassill was able to avoid an accident on lap 97 while running 25th. The team opted to keep him on the track to restart 19th.

● On the lap-104 restart, the No. 96 Carnomaly Toyota Camry got shuffled back in the pack as rain loomed off turns one and two. He was running 27th before the caution came out for an accident on lap 116.

Landon Cassill, driver of the No. 96 Carnomaly Toyota Camry for Gaunt Brothers Racing:

“It was just kind of uneventful for us. I was just biding my time, and we just didn’t get to do what we wanted to do. We kept seeing all the activity out front and let them all wreck. Luckily, we were able to avoid all the wrecks. We just needed a restart.”

The next event on the NASCAR Cup Series schedule is the Bank of America Roval 400 on Sunday, Oct. 10, at the Charlotte (N.C.) Motor Speedway Roval. It is the sixth race of the 10-race playoffs and the final race in the Round of 12. It starts at 2 p.m. EDT with live coverage provided by NBC and SiriusXM NASCAR Radio.