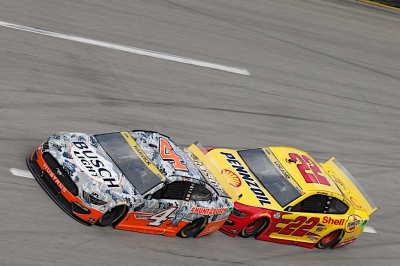 ●  The No. 4 Busch Light #Hunt4Busch Ford Mustang spent the opening laps running the low line around the 2.66-mile oval.

●  By lap five, the inside line seemed to have an advantage, taking a six-car lead over the outside line with Harvick in fourth place.

●  Harvick jumped out to lead the outside line on lap seven, eventually taking the race lead with six Fords behind him.

●  Harvick continued to lead the outside line, but by lap 12, the inside lane made a resurgence, with Matt DiBenedetto taking the race lead.

●  By lap 15, the field was three wide, with Harvick leading the middle line as he battled Martin Truex Jr., for the race lead.

●  The field retuned to two-wide racing by lap 18, with Harvick leading the inside line while running fourth overall.

●  The inside line became the dominant line on lap 21, with Cole Custer taking the lead and Harvick behind his Stewart-Haas Racing (SHR) teammate in second.

●  “Temps are good, balance is good,” said Harvick on lap 24 while in second.

●  Harvick took advantage of competition caution and pitted for right-side tires and fuel on lap 27.

●  Lined up first for lap-30 restart and reassumed spot in inside line, with Kurt Busch eventually dropping down from outside line in front of Harvick to take the lead on lap 30.

●  Harvick slide to the inside of Busch and passed him for the lead on lap 34.

●  Denny Hamlin led a string of cars on the inside of Harvick to take the lead on lap 38, with Harvick falling to fifth in outside line.

●  Harvick was fourth when caution flag waved for an accident on lap 56.

●  Cleanup for the multicar crash meant the stage ended under caution.

●  Pitted for four tires and fuel upon the conclusion of the stage. No other changes.

●  A flat left-rear tire forced Harvick to pit again before the start of the second stage. Four new tires were bolted on.

●  The No. 4 Busch Light #Hunt4Busch Ford Mustang had climbed to 13th by the time the caution flag waved for debris on lap 68.

●  Pitted on lap 72 for fuel only before a rain shower red-flagged the race for 18 minutes and 20 seconds.

●  Harvick topped off with fuel and then lined up ninth for lap-78 restart.

●  Rose to third by lap 79 and second by lap 80 behind leader Christopher Bell.

●  Inside line re-emerged on lap 84, moving past outside line and jettisoning Harvick to fourth.

●  Harvick dropped back into inside line on lap 87 to re-take second place behind Bell.

●  Harvick then pulled to the outside of Bell on lap 89 to grab the race lead.

●  Three-wide by lap 93. Harvick ended up in the middle before ducking into inside line as pack contracted to two lines.

●  Harvick was third as race crossed its halfway mark.

●  Harvick was fifth before a multicar accident brought out the caution on lap 98.

●  Maintained position within inside line as top line raced in parallel.

●  Three-wide by lap 108 with Harvick the third car in inside line.

●  Harvick followed Busch and climbed to second on lap 110 with the duo leading the inside line.

●  Harvick pulled wide outside of Busch on lap 111 in a bid for the lead, but he got hung out with no drafting help and fell to 18th.

●  Harvick rallied back to eighth by the time the caution came out for an accident on lap 116. Meanwhile, raindrops began to fall over the track.

●  Rain intensified, forcing NASCAR to red flag the race again and, ultimately, to call the race official after 117 laps.

●  Harvick’s 18 top-10s at Talladega are the second-most among active drivers.

●  This was Harvick’s second straight top-10 at Talladega. He finished fourth in the series’ prior race at the track in April.

●  This was Harvick’s 11th straight top-15, a streak that began July 11 with an 11th-place finish at Atlanta Motor Speedway.

●  Harvick led five times for a race-high 16 laps, increasing his laps led total at Talladega to 292.

●  There were five caution periods for a total of 27 laps.

●  Thirty-one of the 40 drivers in the YellaWood 500 finished on the lead lap.

“I got shuffled out there too late for the rain storm, but our Ford Mustang was fast and we were able to make up some ground and get back up closer to where we needed to be. I hate that it started raining. Our car was fast.”

Playoff Standings (with one race to go before Round of 8):

The next event on the NASCAR Cup Series schedule is the Bank of America Roval 400 on Sunday, Oct. 10 at the Charlotte (N.C.) Motor Speedway Roval. It is the sixth race of the 10-race playoffs and the final race in the Round of 12. It starts at 2 p.m. EDT with live coverage provided by NBC and SiriusXM NASCAR Radio.