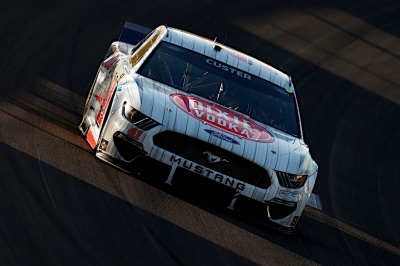 ● The No. 41 Dixie Vodka Greyhound Cocktail driver reported early in the run that his Ford Mustang started off tight but would build loose as green-flag laps continued. He told the team that he would fire off fine, but the balance of his racecar worsened after that.

● Under the lap-25 competition caution, the No. 41 team pitted for four tires, fuel and an air pressure adjustment to attempt to fix the balance of the racecar. Custer restarted 24th.

● As the remainder of the first stage went caution free, Custer began to fall back in the field as the balance on the No. 41 Dixie Vodka Greyhound Cocktail Ford Mustang loosened. He ultimately fell to 30th and was passed by the leaders, putting Custer one lap down as the stage came to an end.

● During the stage break, Custer told the team that his Ford Mustang was still extremely loose and the front turn wasn’t good. He pitted for four tires, fuel, wedge adjustments and air pressure adjustments.

● The 23-year-old driver worked his way up to 26th by the time the caution came back out on lap 92. He reported that the No. 41 Dixie Vodka Greyhound Cocktail Ford Mustang was firing off tight and becoming loose after the initial few laps. Crew chief Mike Shiplett made the call to bring Custer down pit road for four tires, fuel and another shot at an adjustment.

● Custer reported on lap 123 that he felt like he was starting to lose right front grip a little too much as the sun started to set in Las Vegas.

● As the second stage also ended with another caution, Custer was relatively quiet on the radio. He was in 26th when the stage break caution came out on lap 160.

● Under yellow, Custer told the team that the rear grip in his Ford Mustang was good but that work was needed on right-front grip. He pitted for four fresh tires, fuel and another round of adjustments to combat a still loose racecar.

● The No. 41 Dixie Vodka Greyhound Cocktail Ford Mustang started to run tight during the initial laps of the final stage. Shiplett told Custer to run his racecar up by the fence to see if that would help.

● As the stage continued, Custer reported that he started to have less rear grip as the sun went down over the track. The team brought their Ford Mustang down pit road on lap 206 for a green-flag stop to put on four fresh tires, fill up on fuel and make another air pressure adjustment.

● Custer reported that he still couldn’t turn the right front like he wanted. Ultimately, unable to overcome the racecar’s handling issue, he finished 29th, two laps down.

“Another rough race for our team. We struggled with the balance of our No. 41 Dixie Vodka Greyhound Cocktail Ford Mustang and just couldn’t get it right. We’ll head to Talladega.”