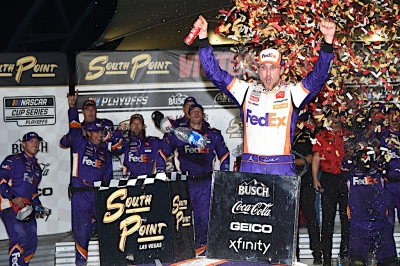 With his win on Sunday, Hamlin earns a spot into the round of 8.

Sunday’s victory marked Hamlin’s second win of the season. His first win came in the NASCAR Cup Series round of 16 opener at Darlington Raceway.

“It feels so good to win in Vegas,” Hamlin told NBCSN post-race. Last couple of times I’ve been so close. Just didn’t have the right brakes but they dialed the car in great and we were able to hold these guys off.”

Hamlin doesn’t have to worry about the next two weeks at Talladega and the Charlotte Motor Speedway Roval as he has locked himself into  the next round of the playoffs.

Rounding out the top five were Case Elliott in second, Kyle Busch in third, Martin Truex Jr. in fourth and Ryan Blaney in fifth.

Chase Elliott, who finished second made a run at the win in the final few laps as he cut down his lead to under half a second.

Rounding out the top ten were Tyler Reddick in sixth, Brad Keselowski in seventh, Kurt Busch in eighth, Kevin Harvick in ninth and Kyle Larson in tenth.

The NASCAR Cup Series will head to Talladega Superspeedway next Sunday, Oct. 3 at 2:00 p.m. Eastern on NBC.