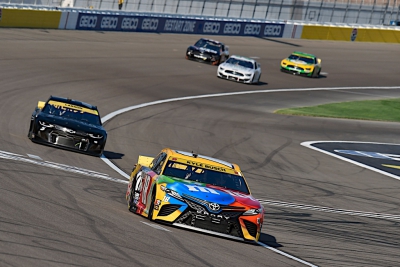 ● The M&M’S driver started 10th, but he picked off several spots right off the bat. Busch was in fourth by lap two and up to third by the time the competition yellow waved on lap 25.

● The Las Vegas native came to pit road on lap 27 to take on four tires, fuel and an air pressure adjustment. The M&M’S over-the-wall team gained Busch two spots coming off pit road to assume his first lead of the day.

● Busch eventually settled into the second position, where he ended Stage 1.

● The Las Vegas native came to pit road following the stage for tires, fuel and adjustments, but an issue with the jack getting on the peg dropped him to seventh coming off pit road.

● Busch radioed to the No. 18 team just five laps into the run, telling them he felt a loose wheel on the left side and may need to pit. When the caution came out just a few laps later for an accident, the M&M’S team was able to come down pit road to remedy the situation with a change of all four tires on lap 94.

● The two-time Cup Series champion restarted 12th on lap 98. He slowly worked his way toward the front of the field, entering the top-five by lap 114 and reaching third on lap 117.

● Busch moved up to second behind JGR teammate Denny Hamlin to finish the segment, earning more valuable stage points in the championship battle.

● The M&M’S driver came to pit road following Stage 2, with crew chief Ben Beshore calling for four tires, fuel and a trackbar adjustment to loosen up the No. 18’s tight-handling condition.

● Busch restarted fourth for the final stage and had settled into the fifth position by lap 189.

● Busch sat near the top-five until his final pit stop of the race, which came on lap 210. The M&M’S driver came to pit road in sixth place under green, but when things cycled out he found himself in fourth and chasing down JGR teammate Martin Truex Jr. for the third position as the laps wound down.

● The Las Vegas native finally got by Truex on lap 243 to bring home a third-place finish and strong points position heading into the unknown of Talladega (Ala.) Superspeedway next weekend.

● Busch now has nine top-five finishes in 21 starts at his hometown track in Las Vegas.

● Hamlin won the South Point 400 to score his 46th career NASCAR Cup Series victory, his second of the season and his first at Las Vegas. His margin over second-place Chase Elliott was .442 of a second.

Was tonight a night where you did what you needed to do?

“Certainly you want to win, but we maximized today the best we had. The 11 (Denny Hamlin) was better than us. I thought early when the sun was out we were better than him, but once the lights turned on we kind of lost a little bit and we got ran into the wall twice off of turn two. That doesn’t help things. Guys did a great job. Thanks to Ben (Beshore, crew chief) and all the guys on our M&M’S Toyota Camry, we were fast, we were frontrunners all night long. Just wasn’t able to get everything we needed today for a win. Thanks to Rowdy Energy, TRD, Interstate Batteries, Ethel M here from Las Vegas. See what happens next week.”

What will be your mood leaving Las Vegas tonight?

“We got all we could. I felt like during the daytime we were a little bit better than the 11 (Hamlin). We could race with him. I felt like I was looking forward to the lights coming on and us picking up speed and being able to rip the wall a little bit faster. When we got hit into the fence there off of (turn) two the first time, it definitely knocked speed out of our car. We helped it a little bit coming to pit road putting the last set of tires on it, and then I got into the fence again trying to get by a lapped car. Not enough room over there, I guess. Overall, great job by Ben (Beshore) and my guys on this M&M’S Camry. They gave me a good piece. We moved forward all day long, so that was good, and just appreciate TRD and Interstate Batteries, Rowdy Energy and Ethel M for being here from Las Vegas, and all of those guys were here today. Good showing.”